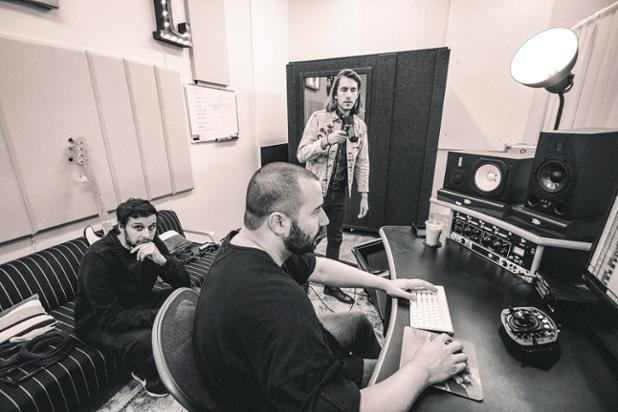 “Is There Meaning” by skinsNbones

The modern definition of punk rock is much different than it was a couple of generations ago depending on who you ask, but for skinsNbones, not much has changed since the old guard other than cosmetics. skinsNbones are an Australian duo whose new single “Is There Meaning” pushes aesthetics towards the old school whilst sticking to a familiar, contemporary sonic depth that blends quite well with the aggressive emotion in the song. Although there’s not as much chaotic white noise in the foundation of this single as there would have been twenty years ago, the ultimate mood of the music remains the same, fostering an angst-ridden sound that a new era of fans will appreciate and relish for the unique item it is today.

There’s nothing typical about the rhythm of this piece, and it’s arguably the most progressive element of the track next to the juxtaposition of the vocal and the guitar. The bass is almost non-existent in a couple of spots, but that doesn’t mean the bottom-end of this single is missing the right kind of oomph. If anything, I like that skinsNbones aren’t relying on a fat bass to shape the throttling push of the beat in this piece, which is likely what a lot of their throwback contemporaries would have done with the exact same piece of material. There are those who dare to be different just for the sake of being a rebel, but I think the intention here is to develop something no one else is playing right now.

I really like how the arrangement forces the band to push themselves as far towards the harmonies as possible without giving into a predictable pop hook, which is a lot easier said than done in my opinion. “Is There Meaning” is demanding a lot out of these two players, and even though this is an original work on their part, it has the feel of a cover song in the sense that the musicians delivering it to us sound like they’re going above and beyond to meet a certain standard set long before they picked up the material. It will be interesting to hear how they tackle other tempos and lyrical tones, but for now, I think this is a good way of getting to know their identity as a band.

While I didn’t know anything about skinsNbones coming into this review, I can say now that I understand their aesthetic and the general direction they’re trying to go in with “Is There Meaning” and wholly approve as both a rock fan and a music critic. There aren’t many tricks that haven’t emerged from the punk rock hat in the past fifty years but changing the genre as we know it isn’t really the goal of skinsNbones in this performance. Contrarily, the model they’re going off of is as classic as the notion of punk itself, which is why they’re able to fill into it as smoothly as they are from one hard-hitting riff to the next.

The music of skinsNbones has been heard all over the world in partnership with the radio plugging services offered by Musik and Film Radio Promotions Division.  Learn more https://musikandfilm.com