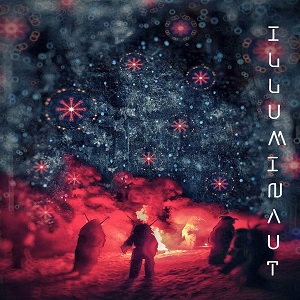 There’s no other music scene on the planet quite like the one Los Angeles boasts, and in their eponymous debut EP, power duo Illuminaut wants to highlight how alive and well rock remains in the city of angels. Although written as a progressive outing with many of the same trappings one would expect out of something akin to a full-length album, this extended play has the efficient setup of an introductory disc and not once tries to overstate its artistic depth with a lot of bells and whistles best left on the sidelines of any recording, rock or otherwise.

Concept doesn’t dictate structure in this record, but instead the other way around. Because it’s quite obvious that Illuminaut care about harmonies – just check out “Native Alien” – there’s never a moment where they aren’t putting the melodic might at the forefront of the mix next to their super physical drum presence, the latter of which is generated by Mr. Ben Taylor. Taylor’s beats match up well with the seductive lead vocal Blaze Powers is putting down at the head of the arrangement, and as much as they connect with each other in the groove, they always sound like they’re competing for the lion’s share of our affections.

You won’t find a lot of the common ego-stroking that goes into making some modern alternative rock records in this piece, but instead a dedication to aesthetics that ensures unneeded virtuosities never come into the fold. Who needs an elaborate solo when you’ve got the grounded rhythm of a song like “The Grey” to cling to? Quite frankly, I don’t know why there aren’t more progressive rock and metal bands trying to make their music this way – it’s clean, straight-up, and puts all of the emphasis squarely on musicianship.

The fluidity of this tracklist is absolutely amazing, especially being that we’re listening to an extended play rather than a proper studio album, and at no point does any of this material sound like an abbreviation of what we would hear out of Illuminaut in an LP setting. They’re giving us a lot of guts in the likes of “Dead Messenger” and “Two Wolves,” and it’s hard for me to imagine their melodic presence being nearly as spellbinding as it is in this instance were they taking a chamber pop-style approach rooted in insularity more than effectiveness and pure volume.

Illuminaut feels like a sneak preview of what this band is going to be all about in the years to come, and personally, I hope they don’t rush anything moving forward with their next release. This is the very antithesis of the thoughtless alternative rock that seemed to take the last remaining life out of the genre as the mid-2010s came around and mainstream tastes in guitar-oriented music began to shift significantly, and if this band is able to take this style and run with it a little further outside of the familiar, they’re going to be sitting on a sound that a lot of fans will be eager to embrace.