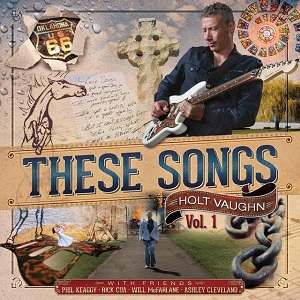 Holt Vaughn’s built a solid reputation over recent years as one of gospel music’s best songwriters and performers but pigeonholing him as that alone does no one any favors. His talents are much broader than that without ever sacrificing or diluting his faith. Vaughn’s These Songs, Vol. 1, if nothing else, demonstrates how Vaughn has skillfully married his spiritual concerns with stereotypically secular music. There’s nothing exclusionary about his songwriting point of view – believer and non-believer alike can enjoy these songs equally.

Whatever my own beliefs are or are not, I am on the side of anyone depicting their own in song. Self-expression is the essence of art. You hear self-expression happening in its purest form with the album’s first track “These Songs” – it’s a knowing, even lightly semi-humorous take on the constant balancing act life demands. You can’t help but enjoy the personality Vaughn interjects into his performance.

Gifted guitarist Will McFarlane makes his first appearance on the album with the track “Woman of Light”. You can take this track in a couple of ways if you like. A literal interpretation of the lyrics reveals a poetic meditation full of spiritual influences while others can hear it in a similar way as an ode to a Muse figure. This sort of elasticity surfaces in many Vaughn tracks widening their potential appeal. McFarlane’s cutting guitar work is a highlight, for sure, and it’s notable how he never oversteps, a mark of genuine polish.

His penchant for sketching out suggestive yet compelling narratives shines with the track “Sid and Ruby”. It has a slow-burning character, once again leaning heavily on his bluesy influences, and Vaughn’s voice summons the necessary grit. “Sparkle in Your Eye”, however, is a much more evolved nod in the direction of the album’s second track. Vaughn’s poetic skills reach a zenith here as the significant detail and well-chosen imagery.

It’s Phil Keaggy’s guitar playing, however, that gives the track its brightest musical moments. Keaggy, arguably one of the greatest guitar players few people have heard of, made his initial name as a key member in the 1970’s band Glass Harp. His strong faith has limited his public exposure over the years but his musical skills, as heard here, speak in a universal language anyone can understand. We return to the blues again with the song “Tulsa, Oklahoma”. Vaughn plunders the genre’s long lyrical tradition without ever sounding like a pallid copy of the original and Will McFarlane’s return helps double-down on that. His guitar work, once again, isn’t overwrought and emotionally on-point throughout.

Vaughn steeps “High on a Bended Knee” in his religious convictions but it is redemptive rather than some sort of challenge to listeners. The violin threading through the arrangement intensifies the song’s eloquence without ever taking it too far afield of Vaughn’s typical stomping grounds. It’s a beautiful and substantive achievement. The finale “Where You Are” is a duet featuring Vaughn teaming with the soulful Ashley Cleveland. Her smoky tone provides an ear-catching contrast with Vaughn’s much more plaintive voice. It brings These Songs, Vol. 1 to an elegant and deeply felt close.