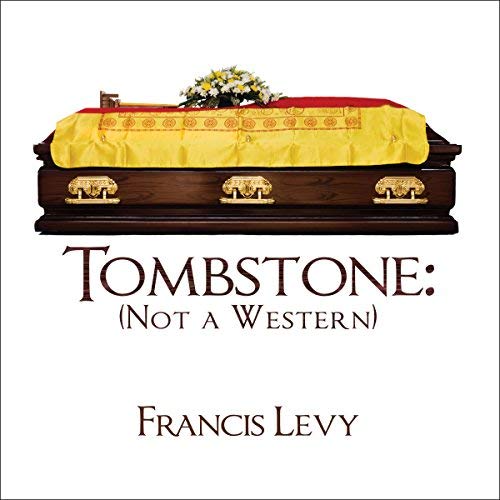 “Tombstone: (Not A Western)” is the latest novel by writer Francis Levy, and is now available in audiobook format worldwide through Beacon Audiobooks.

“Tombstone: (Not a Western)” is a comic novel about the funerary business. It begins with its two protagonists, Robert and Marsha Bernstein, making their arrangements. Cremation versus interment are debated with a mortician at a prominent Manhattan funeral home.
Wills and trusts are complicated by a financial scandal which lands Robert and Marsha at El Rancho de Campo, an all-inclusive resort in Tombstone, Arizona, catering to those whose concerns lie with the afterlife and where graveyards and golf courses collide. Comedy and spirituality go hand in hand as Robert and Marsha haplessly negotiate their way to the hereafter.

Levy is as concerned as the next person about finding solace in thinking about death, but he prefers to approach the subject from the back door. His finely-honed blend of humor and the absurd, along with an obsession for every detail will leave readers laughing out loud and perhaps get them thinking about their own lives, relationships, and plans for the inevitable.

Levy’s first two well received novels Erotomania: A Love Story and Seven Days in Rio (Two Dollar Radio) explored and poked fun at human sexuality. In Tombstone, Levy hits the perfect pitch of comedy, spirituality, and sexuality, while exposing the ins and outs of the funerary business (yes, he says, it can cost a fortune to die).

About the Author:
Francis Levy has had stories, humor, criticism, essays, interviews and poetry published in The New York Times, The New Republic, The Washington Post, The Village Voice, The East Hampton Star, Evergreen Review, Contemporary Psychoanalysis, American Imago, Bomb and The Brooklyn Rail amongst others. He was co-founder of The Philoctetes Center for the Multidisciplinary Study of Imagination. Levy received a BA from Columbia University and an M.F.A from the Yale School of Drama. He practices traditional Japanese karate and has attained the rank of Sensei or fourth degree black belt. His workout regimen was the subject of a profile in The Wall Street Journal.

Download “Tombstone: (Not A Western)” written by author Frances Levy and narrated by Kyle Maraglio in audiobook format on Audible today: