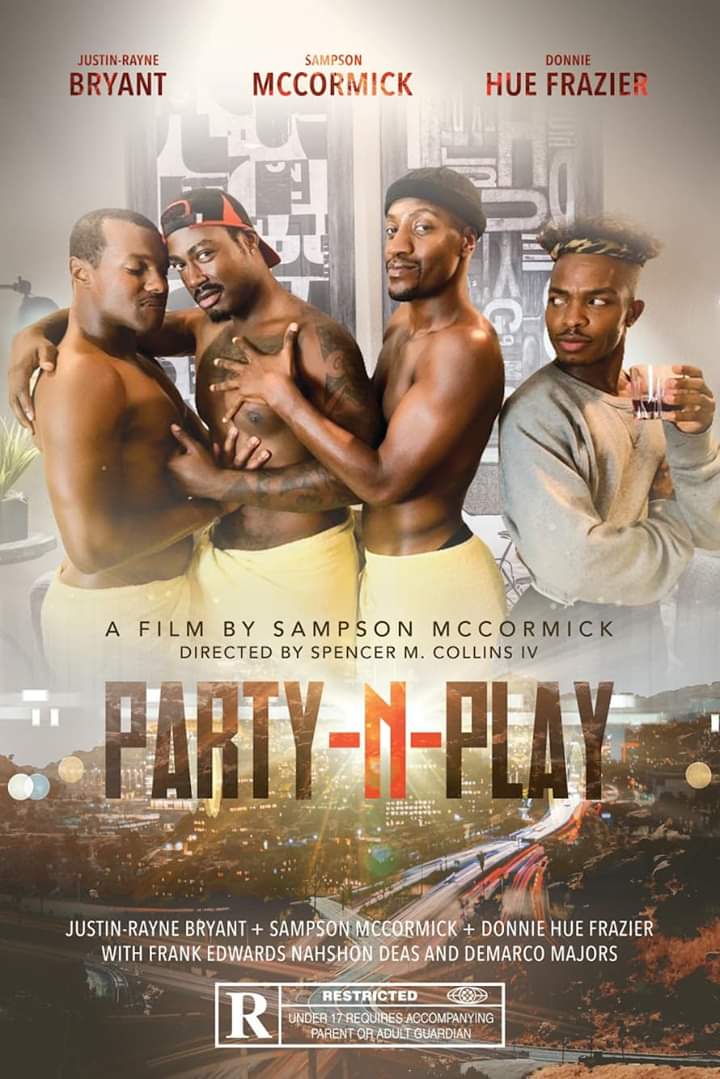 The Beyhive might open a whole apiary on award-wining out comedian Sampson McCormick for this one.  The Los Angeles funnyman, known from coast to coast for his irreverent but delicious brand of stand-up, has created a whimsical new short film, Party-N-Play, which takes the Black gay Beyonce trope (plus many other things) and proceeds to let go and let have at them all.  The story is a savagely tongue-in-cheek look at Chauncey (Blue) Powell (Justin Rayne-Bryant), whose dedication to Queen Bey subsumes all his other responsibilities, as he goes deep into overdraft territory for concert tickets to see his favorite diva.

The smoking-hot Blue (this is not a movie to watch on a train or at your local Starbucks—the whole cast is fine, fit, and they are all authentically their own gay selves) irks his roommate, Jalen (Donnie Hue Frazier) with his lackadaisical attitude towards the impending bills, while he scrambles to put things right.  McCormick, who wrote and produced the picture, also plays the role of carefree Aquarius, a puckish beachcomber who is as bold as he wants to be, in and out of bed.

PNP, as McCormick tells it under the direction of Spencer Collins IV, is a playful jab at shade queens, sex parties, Black gay men, and, of course, Ms. Carter herself.  The story is smartly compact (the film itself runs less than an  hour), but besides the eye candy, there’s a subtle message McCormick delivers, by having his characters scantily clad, but intimate, kissing each other, loving (or at least lusting after) each other: the lives of ordinary gay men living in their limelight.

That’s a statement in itself—just ask the execs at Delta Airlines, who recently chose to cut all the gay scenes from the Elton John biopic Rocketman before clearing it for showing on its flights—and here McCormick scores extra points for diligence.  Then, too, is the nod to the changing nature of relationships between some SGL men, as a scene with Aquarius and his erstwhile lover Demetrious (DeMarco Majors) illustrates.  Within McCormick’s artistic vision, he avoids falling into jejune clichés, while still slipping in a few undercover realities amidst the hijinks.

Supporting actors Frank Edwards (Isaac) and Nashon Deas (Deron) round out a cast that seems to be thoroughly enjoying their roles; the interplay between the characters is easy and unforced.  The film does have a few only-in-Hollywood touches: do Lyft drivers in LA really wear halter tops like Jalen does? Nevertheless, PNP has some genuinely rolling-on-the-floor moments, as when Aquarius steps out of a sex party and calls out, “trade, trade, is that you?”  As satire, the film works, too, as the darkly macabre finale plays out to the kicker ending.  McCormick has drawn well on his comedic and theatrical roots to serve up this witty little vignette, and the cast brings it to life elan.  You can see it for free on YouTube now.  Don’t let the bees keep you away.