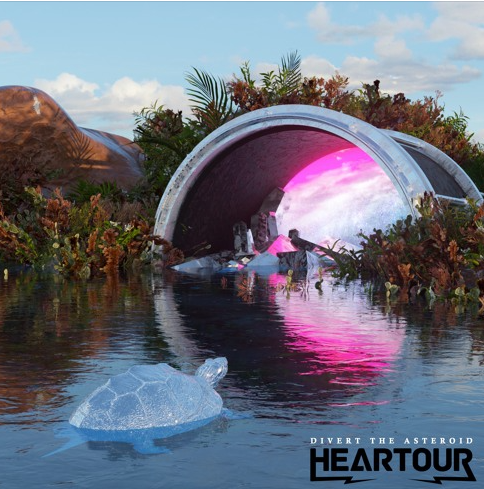 Heartour – “When The Lights Go Down”

To have someone who is there when no one else is, who can sweep away the pain and misery with something bright amid total darkness, is of unparalleled value in this life. Finding such a person can feel almost impossible, but when they’re there, it’s as though they were never apart from your life in the first place. Heartour wants to be that someone in the new single “When The Lights Go Down,” and whether you’ve already got a significant other in your life at the moment or not, I’d recommend making room for the aural charms that this track has to impart to all who give it a listen this summer. This is as bold as indie rock can be, and for Heartour fans, it’s a long time coming.

These instruments embody the depth of the lyricism as opposed to merely extending it unto us when verses fail to convey the weight of the emotions behind them. One of the sexiest elements here is the duality we’re getting between the thrust of the percussion and the steady, occasionally stoic presentation of the vocal – while both need each other to sound eternally profound, neither are willing to sacrifice any space in the mix when it comes time for a climactic moment in this arrangement. There’s a lot of discord to be experienced in “When the Lights Go Down,” but if you’re into the edgier end of the pop music lexicon, I think you’re going to be very enamored with what Heartour has created for us in this piece.

The vocal delivery only adds to the authenticity of the lyrics, and if there would have been someone less swaggering giving up the words one by one to us from behind the mic, I just don’t know that “When the Lights Go Down” would work the way it does in this instance. It should be said that Heartour is run by a man who doesn’t take after anyone else in the business, and with his own personal trademark on this track, it’s justly difficult for me to picture someone else carrying it forth from the silence as exquisitely well as this singer and songwriter has. It’s good composing, but I believe it’s even better execution.

I wasn’t seriously into Heartour before I got a taste of the new extended play Divert the Asteroid, but singles like “Little Waves” and “When The Lights Go Down” have made me question why I stayed away from this discography as long as I have. This is definitely a stronger alternative to what the mainstream in pop has been putting out in the last five years or so, and though it’s a little punky in a couple of moments, this single has a crisp finish that tells me its creator is very focused on cosmetics and substance the same. It’s hard to find acts as put-together as this veteran project is, but then again, it’s even harder to find singles as universally listenable as “When the Lights Go Down” is.