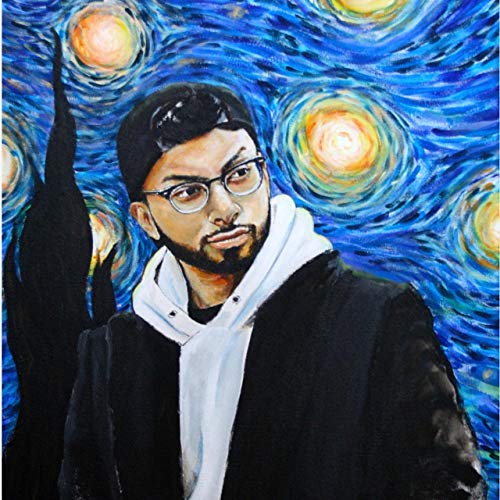 Indie rapper Hassa dropped a supersized single in his debut release, “Aajah,” this fall that has got critics around the country abuzz at the moment, but don’t let the song’s gorgeous cosmetics fool you – stylistic overindulgence plays no part in this track’s grandeur. With a commanding presence more akin to what I typically hear from season studio players than it is anything most rookies produce, Hassa brings an all-heart energy to the microphone in “Aajah” that is really refreshing to hear in 2019, particularly when taking into account just how commercialized hip-hop’s mainstream output has felt in recent times.

The main vocal track in this single has a raw tonality that stops short of abrasiveness but definitely sounds a lot more authentic than most, and I think that its graininess adds to the vulnerability in the song substantially. There’s never any debating whether or not the singing is real and not the product of some technologically-sophisticated autotuning, and amidst the fabric of the synth harmonies in the background, it gives us some insight into the emotion that Hassa is experiencing beyond the mere words that he’s dispensing to us so fluidly. He wants us to feel exactly what he’s feeling here, and he’s using anything and everything at his disposal to get the results he wants.

I think that the bassline in “Aajah” could have been a bit bigger than it is without interfering with the flow of verses, but I can understand why Hassa wanted to go in a different direction with this track. There’s a surreal bend to the construction of the low-end tones in the song that wouldn’t be as effective if the bass were just as loud as the vocal is, and in keeping the beat where it belongs (centered solely on the drums), this single ends up playing out more like a stone cold classic than it does a random indie eccentric.

This interplay between the percussion and the core melody in the refrain immediately grabs my attention every time I sit down with “Aajah.” It releases all of the tension left over from the chorus in one fell swoop, and rather than extending the catharsis into the next string of verses, it abruptly cuts us off and leaves us hungry for more around the next turn. I don’t think there is any room to dismiss Hassa as anything but a high-potential composer after getting hooked on this track, because in this day and age, finding a hip-hop songwriter with as much creative self-control as he’s got is like locating a needle in a California-sized haystack.

While I hadn’t heard of Hassa before picking up a copy of “Aajah” for myself just this past weekend, I’m planning on paying close attention to everything that he’s developing from here on out. With so many young rappers possessing exceedingly impressive talent and making noise left of the dial nowadays, it can be hard to keep the real gems on our collective radar, but I don’t see this being a problem with Hassa. He’s got a one of a kind skillset that goes to work hard in “Aajah,” and I can’t wait to hear it in action again soon.