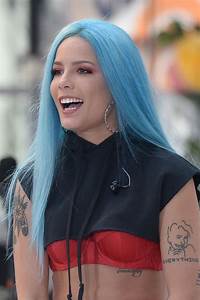 Halsey Advises Fans Against Sleeping With An Ex During Concert

Halsey reportedly gave her fans relationship advice during her concert on Saturday (7/14/18), warning them against sleeping with their exes.

The Bad at Love singer announced her split from rapper G-Eazy at the start of July, and alluded to the breakup by mentioning she had been badly hurt by someone before she launched into song Sorry during a concert at The Event Center at Borgata Hotel Casino & Spa in Atlantic City, New Jersey on Saturday night.

She also referenced her new single status and dished out some advice, telling fans, “I learned recently it’s okay to be alone. Being alone is enough. The second lesson I learned is don’t sleep with your ex.”

Halsey, real name Ashley Frangipane, later performed at the Premier Nightclub inside the resort and called out all the single people in the crowd and said she wasn’t going home with anyone before launching into Bad at Love.

The 23-year-old was recently linked to her rumoured ex Machine Gun Kelly, who she was previously thought to be dating in early 2017, after a photo of the duo at the beach circulated online, but she shut down the speculation by tweeting, “I’m not with anybody. That photo is 2 years old. Everyone mind they damn business (sic)”.

In a new cover interview for Marie Claire magazine, published before she and G-Eazy parted ways, Halsey gushed about her Him & I collaborator and revealed they had both just gotten out of relationships when they met, so they didn’t act on their feelings straight away.

The New Jersey concert comes just over a week after the Closer singer began crying while singing Sorry at a music festival.

G-Eazy, who has kept quiet about the split, has since been linked to singer Demi Lovato, after they were pictured holding hands as they left a Hollywood nightclub on Saturday.