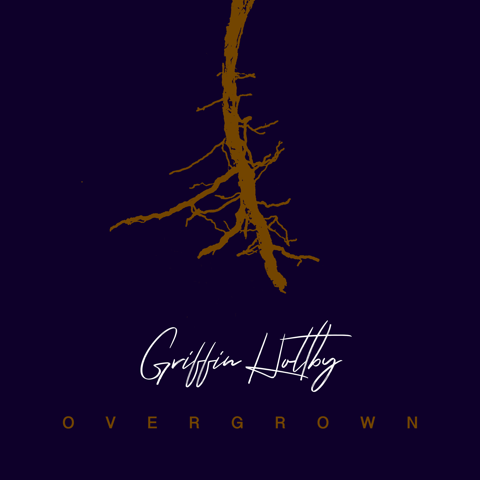 Ukrainian born American transplant Griffin Holtby has experienced more life at nineteen than many of us manage in several decades. Adopted by an American couple at just eight months old, Holtby has since lived in southern locales such as San Miguel de Allende, Mexico and Dallas, Texas and first learned about the transformative power of music in his seventh year courtesy of his adopted father after hearing seminal rockers Cream for the first time. Holtby embraced his destiny in the making as a musician and songwriter early on and wrote throughout middle and high school, but his material and sensibilities are far away from the typical purview of young adults. He brings an old soul to his work and the single “Overgrown” attests to that.

The track has a steady pulse throughout much of its running time and exerts a near hypnotic hold over listeners. Light percussion throughout the track gives “Overgrown” a solid rhythmic anchor from which Holtby can build his performance. There is a tasty guitar presence in the song as well, but Holtby balances these seeming disparate elements with expert skill. His command of songwriting craft helps smooth out the transitions between verses; the track always comes off as a natural experience rather than a forced one where obviously disparate elements are ramrodded together to form an uncomfortable and jarring whole. Holtby benefits a great deal, as well, from first class production that keeps everything in balance; his vocal leads the way, naturally, but no one element overshadows the other.

Many listeners will be impressed with the depth of soulfulness in Holtby’s voice. It is a quality that, like the aforementioned overall feel of the track, comes across as something natural rather than put on or stagy. He never has to push his voice into uncomfortable territory and invests the lyrics with confident authority that never threatens to become strident. His voice has a streak of blue running through it; Holtby can invoke melancholy without ever sounding melodramatic and managing its degree in such a way is one of the hallmarks of a gifted singer. The occasional backing vocals built into the track are a welcome addition.

“Overgrown” doesn’t remake the songwriting wheel and anyone looking for that  should search elsewhere, but there’s no question this young singer/songwriter portrays a seminal life experience, the proverbial good love gone bad song, in language and turns of phrase all his own. The imagery is striking and personal without ever being obscure. It is easier said than done to write something ripped from the pages of your own autobiography yet still touching on common experiences we all share, but Holyby does so with this track.

It’s an sterling effort for Griffin Holtby but, as fine as this single is, you get the sense he is scratching the surface of his talents with this release. That’s fine, everyone starts somewhere. It is certain Holtby will be with us for some time to come and this early single in his career will yield way to even greater achievements to come. Listeners will likely always look back to this track, however, as a true bellwether moment when Holtby first announced himself to the world at large and scores sat up and took notice.