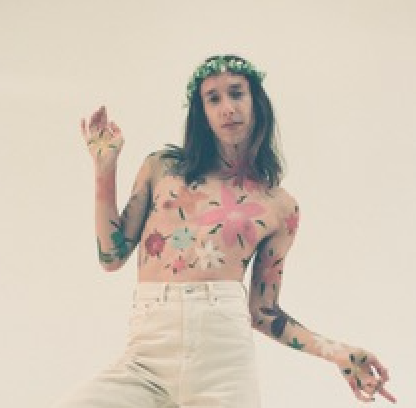 Gabe Furtado has a sound centered on simple melodicism, and his new single “Flowers” reflects this brilliantly. “Flowers” isn’t a song that tries to wow us with a lot of cosmetic theatrics or even that fanciful of a verse – on the contrary, everything here revolves around the whim of Furtado’s lead vocal, which is delivered to the audience with a surprisingly soft, fluid harmony. He isn’t scared to be a little adventurous with the rhythm of his lyrics, but he also isn’t being dictated to by an overpowering instrumental backdrop; if anything, this is a performance that lets him stretch out as much as possible, using the entire space within the mix to really show us everything he’s got inside of a relatively formulaic composition.

“Flowers” enjoys a playful beat that is both disarming and slightly decadent in a couple of spots, but the harmonies that it’s made to frame (and, to some extent, contain) are rather venomous when we get into the second act of the song. There’s a moment where Furtado seems to want irony to overtake the optimism of his melodic presence in this track, but he’s so delicate about it that there’s no rigid shift in tone – it all flows rather breathtakingly. This is a singer and songwriter who knows how to get the most out of something simple, and his efficiencies are inarguably as much of a draw here as anything else is. Lyrics, rhythm, even the production quality relies on his straightforwardness to feel relevant.

This is one of the smarter poetic offerings that Furtado has assembled since first stepping into the spotlight, and it’s worth noting how unabashedly humble he’s being with pretty much every verse in the single. He isn’t having to overthink anything he’s saying because it’s coming natural, much like the emotion in the narrative that’s being built before our very ears. There are many ways you can go about putting an indie pop song like this together, but to do so with relatively no ego or pressure from behind the glass takes a comfortability with the medium few possess in this industry, and it’s something that this player clearly has in every moment of his performance in “Flowers.”

I’m liking what Gabe Furtado is up to in this track, and judging from his ambitiousness here I would have to say that he’s only getting started with what he plans to develop his sound into in future releases. There’s a real experimental edge to hid approach in “Flowers,” but it’s not so far to the left of the mainstream as to repel those who consider themselves casual fans of indie pop only. He’s still got some space for further growth as a composer, but that’s the whole point of the statement he’s making in this single – his evolution is as fluid as the release he’s got behind the microphone, and it’s suggested in this single that we’re only seeing a fraction of what Furtado is capable of doing when there’s nothing to impede his creativity.