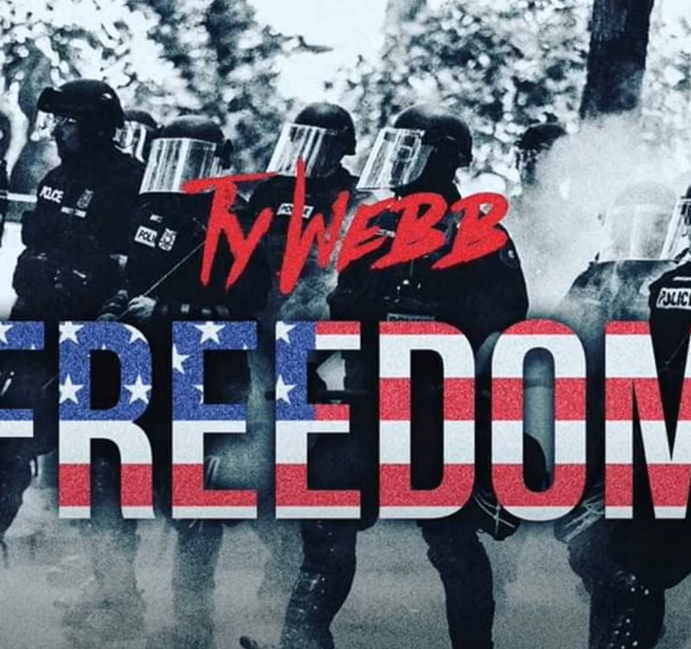 Cascading from the heavens above like some sort of providence-sent gift in the midst of a bleak and battered time in our history, the vocal harmony that fills our speakers when pressing play on “Freedom” by Ryte Eye Ty will shake you to the core without dispute. Where some artists would depend on a fanciful instrumental intro to set the stage for a song as powerful as “Freedom” is, Ryte Eye Ty sees no need; he gets right into the mix with his incredible voice, letting the melodic wonderment he dispenses do all the talking for him. Though there are lyrics in this track that everyone should be paying close attention to, the real star is perhaps the voice of our singer itself, as it translates immense pain and introspection into a language any living being can relate to.

As we follow along with the lead vocal’s ebbtide of magic, there are no moments that feel lacking because of the vocal-focused tone of the music here. The first time that I sat down with “Freedom” to review its core structure, I was blown away by how spellbound I became just when analyzing the depth of the lead vocal, and particularly how well it holds the attention of listeners from start to finish. Ryte Eye Ty is singing about life and death, freedom and persecution, right and wrong, and yet there’s nothing in his voice that would suggest he feels even the slightest bit of pressure to perform. His performance here is completely natural and unforced in every way that matters.

Even at moderate volumes, there’s an intensity to the harmony in “Freedom” that makes it feel as mammoth as a full-blown symphonic movement. Between the substance of the lyrics and the frame through which they’re delivered to the audience, there’s no escaping the wallop that Ryte Eye Ty is throwing down in this single – and, in all honesty, I don’t know why anyone would want to. There’s as much to be said about the soulfulness of this track as there is its gospel roots, and for those of us who have been hungry for something a little more heartfelt in the R&B corner of the pop music spectrum, this is everything that we needed to hear this summer and more.

“Freedom” comes to a conclusion the same way it gets started – with a haunting vocal harmony’s disappearance into the silence, much like the sun setting on a day that has brought with it more change than we would ever know what to do with. If there’s any rookie artist that I’ve come across in the year 2020 that’s on the verge of turning a corner before the bulk of his peers in the underground do, I think it would be Ryte Eye Ty. He’s got so much going for him in this track that it’s hard to believe he isn’t more of a seasoned pro, and given just a little more time to shine, I think he’s going to turn a lot of heads with his music.

The music of RYTE EYE TY has been heard all over the world in partnership with the radio plugging services offered by Musik and Film Radio Promotions Division.  Learn more https://musikandfilm.com