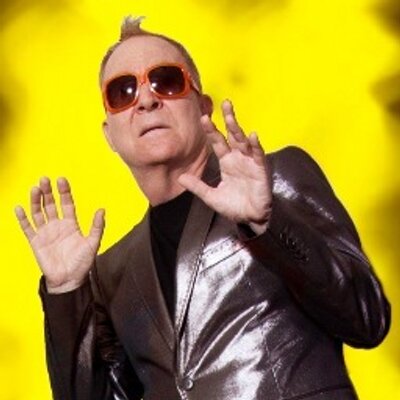 As the iconic co-founder and frontman of the legendary faction The B-52’s and The Superions, Fred Schneider vanquishes the flames of the fiery, plague-ridden nightmare-scape of 2020 with his dazzling quirky antics. He and the Superions have orgasmically captured a kaleidoscope of vibrancy inside their new Christmas album, “Destination Christmas.” With a personality that dare not be challenged by men, angels or beasts, Schneider is embracing the void and inviting us to visit an enforced, imaginary realm in the spirit of the holidays adding his own unique flavor to the mix.

Fred and the Superions actually released the record ten years prior for a minute. However, it was never really promoted and the band had experienced label catastrophism, so one of the planets largest, most innovative music companies, “Kobalt” is now releasing it. Kolbalt is known for using technology to power creative freedom while changing the rules of the music industry.

Fred Schneider is a singer, songwriter and musician best recognized as the front man of the B-52’s. Schneider is known for his sprechgesang which he created from singing poetry over guitars. The B-52’s, considered the most danceable band on the planet are known for theIr thrift shop chic fashion and their super-hits including “Love Shack”, “Rock Lobster” and “Roam.”

As a side project Schneider formed The Superions, a comedy synth pop band out of Orlando, Florida which include members Noah Brodie and Dan Marshall. “Destination Christmas” is anything but traditional, covering topics including fruitcakes, avalanches and yetis. The Superions are anything but a traditional band. Schneider originally met the other band members who are vinyl collectors like himself in 2002 from a mutual friend. The band is described as a nonstop disco new wave party explosion for all generations.

Aside from the music industry Schneider recently formed an alliance with “Breyting Community Roaster”, a coffee company who donates 10% of its proceeds to local growers in Laos who make anti-venom for snake bites and also get rid of the bombs we dropped on Laos during the Vietnam war. Fred has several of his own signature coffee blends which were actually conceived in a true to life roaster.

I spoke to Fred regarding all of his projects. For Fred what started his adventures was a single leap of faith…..

“Destination Christmas” Is now being promoted by Kolbalt, but was actually recorded 10 years ago?

It came out 10 years ago, but we stopped promoting it because the label we were on was screwing us over. It didn’t get promoted or anything, so it’s like a nest record for a lot of people. The New York Times reviewed it for their 10 best Christmas albums of the year a couple of years ago and they said “Just when you think that it can’t get any worse than the North Pole, it does.” Six of the songs are on YouTube. There’s “Fruitcake”, “Crummy Christmas Tree”, “Chillin’ At Christmas”, “Santa’s Disco”, “ Laughter at Christmas” and others. It hasn’t been promoted in years and it hadn’t been available. We have our own YouTube channel.

I wasn’t aware you had another band, but I’m glad you do. Is this well-known?

Do you ever go out on stage and forget the words?

Oh yeah. I just get distracted. So many times my mind drifts off in the middle of a song with the band.

You write for songs for a lot of other people as well? For example?

Elvira. You have to check out the song she did on YouTube called “The Big Pumpkin”. It’s about a pumpkin patch. She’s hysterical.

Who is your favorite artist on the planet? And if someone recorded the soundtrack of your life, what songs would be in it?

If you could have me ask you any question in the world what would it be?

I would have you ask me what are my two passions and I would tell you writing and my coffee business. Getting my coffee company going is a whole new career for me. It’s been put on hold because of this pandemic.

I’ve got the Christmas album and the videos. They are pretty entertaining. It has gotten lots and lots of views which is very gratifying because we had our friends and people that were doing the make-up and stuff like that in the videos. The same people are in the videos because it was so much fun. The songs are really funny. No one has a Christmas album with a potential slasher in it. That’s in “Santa’s Disco.”