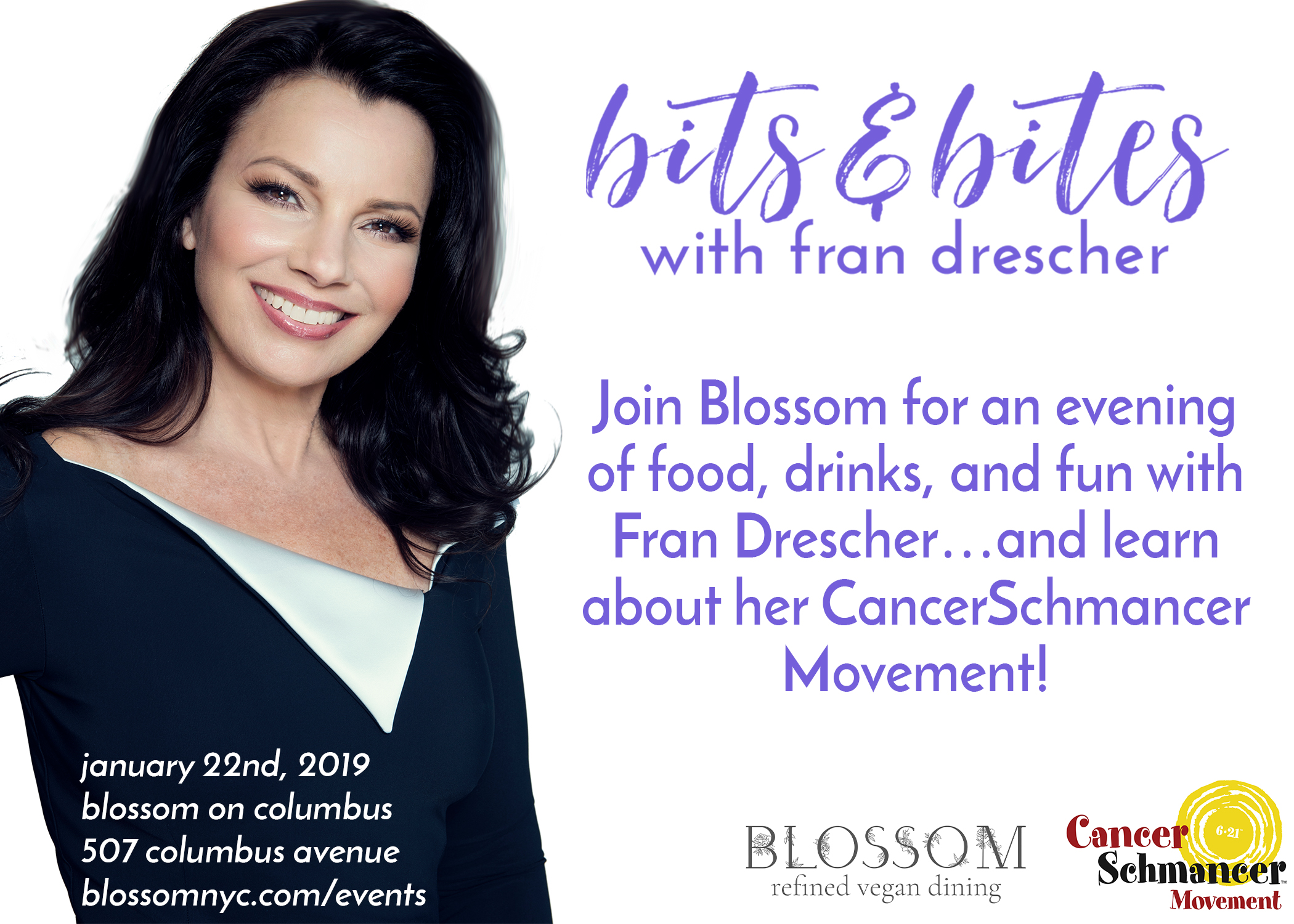 One of the planet’s most notable, and loved characters, “The Nanny”, also known as Fran Drescher will be appearing at an intimate cancer awareness event at Blossom Restaurant, known as pioneers in modern vegan cuisine, in celebration of her “Cancer-Schmancer movement, January 22, 2019. 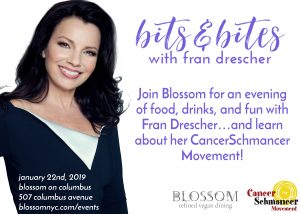 The actress, comedian, writer and activist is a cancer survivor herself as well as an LGBTQ rights advocate. Her focus on her Cancer-Schmancer Movement is to “shift the nations focus from just searching for a cure to prevent an early detection of cancer in order to save lives”. The organization concentrates on Early Detection, Prevention, and Policy Change.

I spoke with Fran Drescher (for the second time), regarding her mission and once again found her to be a complete visionary… While freezing outside in 7-degree weather, and traveling to a meeting, on one of her busiest days, she filled me in on the spirit of Cancer- Schmancer….

The very word cancer evokes an uncomfortable fear in the hearts of everyone. How do you get people to listen to you so that you can get your message across?

Well, first of all the name of my organization that I founded, “Cancer-Schmancer”, says it all. It says that “cancer is not the boss of me.” So that’s the beginning of it. Then I empower people with knowledge that they might not get at their regular doctor’s office which is the causations of cancer, how to prevent cancer, how to change your lifestyle, how to use your hard earned dollars as an influencer for a more responsible manufacturing trend. How to recognize the early warning sayings so you can go to your doctor with sayings like, “catch it on arrival, 95 percent survival.” We force people to not be an ostrich but to be proactive, we motivate, activate and educate people. Also, we enlighten you to other options. They are out there either as a compliment to traditional Western medicine or in replace of. Knowledge is power so the more you know, the more of an important decision you can make. There are a lot of very successful ways to deal with cancer that does not necessarily always have to involve chemotherapy, or radiation?

I see new pills that you can take for example on television commercials all the time now instead of chemo.

We spoke about 3 years ago, what has the “Cancer-Schmanzer” movement accomplished since then?

We do an annual Fran Drescher Master class health summit in Los Angeles and the one from October 28 is going to be released as a free educational series this spring for everyone around the world to see the most groundbreaking doctors and experts and authors speak on a myriad of health issues. Then you will have the opportunity to buy it as a tax-deductible download. Then on Earth Day, we have a wonderful half hour program starring Jamie Foxx and myself and a bunch of kids. That will be targeting teens to become more informed consumers and to be the change. We want to motivate, educate, activate them to be the change because they are the first generation in US history predicted to not live as long as their parents. We don’t wish to make that a self-fulfilling prophecy. This program which is very viewer friendly and kid friendly, with animation in it, kids in it, and it’s very mind blowing in mind expanding information, that I don’t think they really think about because they are a multi-million dollar demographic that are not terribly discerning and easily manipulated in marketing. It’s not serving them well.

Will there be any events similar to the one where people are allowed to bid for the prize of an intimate dinner with you?

There are always opportunities for that. We are always posting for that. We just did a lovely dinner with a mother and son who buy that every year as a tax-deductible donation. We are lucky that this is a celebrity driven organization and that I still have fans. So it’s helpful because we are a lean, mean, fighting machine. We don’t even have an office. We do everything virtually and use board rooms when we need to have a business meeting. So of course, all of that. We are doing “Bits and Bites” fundraiser tomorrow night where people can come and hear about the organization, and hear me speak briefly on it, while having organic healthy hors d’oeuvres and wine. So we walk to talk and the more people that we can get to support us, the more we can keep talking on this subject, waking people up, producing product that are educationally programmed, that really impact the public. When people come in person to see our master class I keep on hearing that it has changed their life and it’s Live streamed what’s happening. Now it’s going to be offered free, an all week long educational series. We are a nonprofit and we are one of the very few if not the only one in the health space.