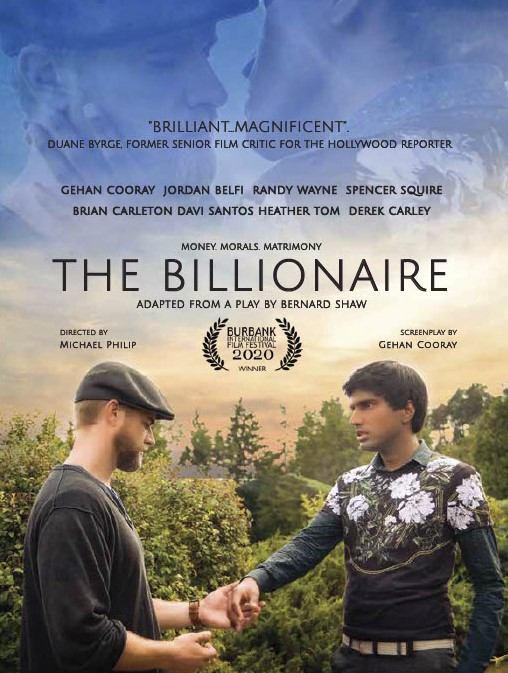 Director Michael White has quite successfully brought us a screen version of a classic play with an array of colorful and well-drawn characters, particularly the film’s central character, Victor.  Based upon the acclaimed George Bernard Shaw play, The Millionairess – – this film is an entertaining, light-hearted, and fun production titled The Billionaire. The film dazzles with its “Old Hollywood” romantic look and 1930s aura feel — films that boosted the likes of actors such as Greta Garbo, John Gilbert, Cary Grant, and Norma Shearer.

The film’s central character, Victor (played memorably by actor Gehan Cooray, who also penned the screenplay and executive produced The Billionaire)carries the film along very ably with much on-screen appeal as he shapes and creates a very unforgettable, unique film indeed in these times we now live.

As the story unfolds, we see Cooray’s Victor in his quest to find a same-sex partner.  Victor, a frustrated billionaire, must follow the conditions his father set forth in his will in order for him to choose a spouse.  That final edict from his father demands Victor’s spouse is to multiply ten thousand dollars into three million dollars.  While already a billionaire, Victor offers this challenge to several interested hopefuls after his present husband proves unfaithful.  Victor is visibly shocked and disturbed when the responses he expects fall flat.  Notably, actor Jordan Belfi shines (as character Julius Sagamore) as a likely mate for Victor.  From here, Victor takes us on a fun-filled and romantic cinematic journey that will surely entertain even the hardest to please.

The Billionaire’s production values are tops as well, offering up for its audiences rich exterior and interior location shots with visual atmosphere, color, all in keeping with the film’s retro Hollywood nostalgia.  The film is always on the move with keen pacing and stride to keep the viewer engaged.  The script by Mr. Cooray is funny and filled with empathy as an ensemble of curious characters built around Victor work hard at their craft to deliver a unique performance in The Billionaire.

Mr. Cooray has deftly served up a one-of-a-kind film in The Billionaire.  He very cleverly and with much professional aplomb has taken a classic play and brought it to the screen with unbridled energy, a lively script that is well-served by his array of curious characters, most notably I felt, his Victor. We need more films like this one out there for audiences to enjoy. For a nearly two-hour entertaining and humorous cinematic sojourn, I recommend this film for all audiences, particularly women and the LGBT moviegoers.  I shall not be a “spoiler” and reveal the film’s ending.  The Billionaire would be perfect for select theaters, as well as premier cable channel(s) and streaming entertainment (Netflix) service.