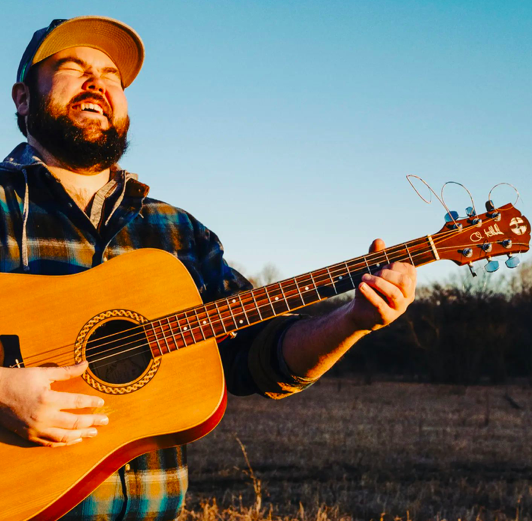 Born to a drummer and pianist in Vicksburg, MS, Zechariah Lloyd woke up every morning to his mother playing on her baby grand. He began playing drums at age 11 on his father’s drum set – cutting his teeth on Zeppelin & Skynyrd records he borrowed from his uncle and playing with the church band. After high school he ended up in Alaska for work, picking up the guitar, and crafting his songwriting skills. He showed back up in Mississippi a year later with long hair and a song to sing.

After delays attributed to the global pandemic, Zechariah & Plaid Dog Recordings were able to finish the EP in February of 2022. The EP, “Heart in a Notebook”, will be released to all public platforms July 14th, 2022. The single, “Heart in a Notebook” releases July 1st. While promoting the release of his current EP, Zechariah Lloyd has been and continues to work on his full-length album with producer, Billy Smiley, at The Sound Kitchen studios in Franklin, TN

What kind of musician would you classify yourself as?

I’d hope for a good one! A little blues, a little country, a little rock n’ roll.

Tell us something about your latest single that no one knows about?

It’s a true story! I wrote a love song for this girl I dated a decade ago and I lost the notebook that I wrote it in. After breaking up, I wrote Heart in a Notebook as my way to process the bittersweet situation.

Your fans are ready to support you full force! What do you admire most about them?

The constant support means the world to me. No matter what they have going on, they make sure to let me know they have my back.

Do you create for yourself or for your fans?

A lot of my songs are created for myself, as a way to process life experiences, but I do believe my fans can identify with a lot of the things I write about.

Has your style evolved since the beginning of your career?

Definitely. My guitar playing has definitely gotten better over time. And in recent years, I’ve tried to be more intentional about writing about different things, and not just life experiences. At least for me, I feel like that’s probably the most noticeable evolution of style in my career.

When was that first moment when you realized that music was going to pay off for you?

I struggled with feeling competent as a performer/songwriter until 2015 when I won the Vicksburg Blues Challenge and went on to represent Vicksburg at the International Blues Challenge in Memphis, TN, where I made it to the semi-finals. This experience gave me the confidence to pursue music full time.

Releasing this single must mean the world to you! What has been the biggest reward from this project?

Getting my first professionally recorded and mastered project done and released has been a goal of mine for years, so just COMPLETING the project and releasing it was really affirming for me, personally. But, unexpectedly, the amazing response from fans and strangers alike, means the world to me. I always try to stay humble, but hearing fans tell me that they really love a song, and that it really hit home and means something to them, really is the best reward for me.

What is your biggest lesson learned from the project?

I think going through the process of recording and releasing this project, I learned the importance of the quality of people that I choose to spend time and energy with.

Creating your vision come true, please share what it really took to make this happen. We’re so invested in what you’re doing!

Honestly, the EP and the start of fully moving towards my dreams wouldn’t have been remotely possible without the people I have supporting me and cheering me on. The project was entirely crowd funded and that means the world to me.  I have always known that God had blessed me and put this calling on my life. It’s just now starting to feel like his plan is coming to fruition.

All your links please!