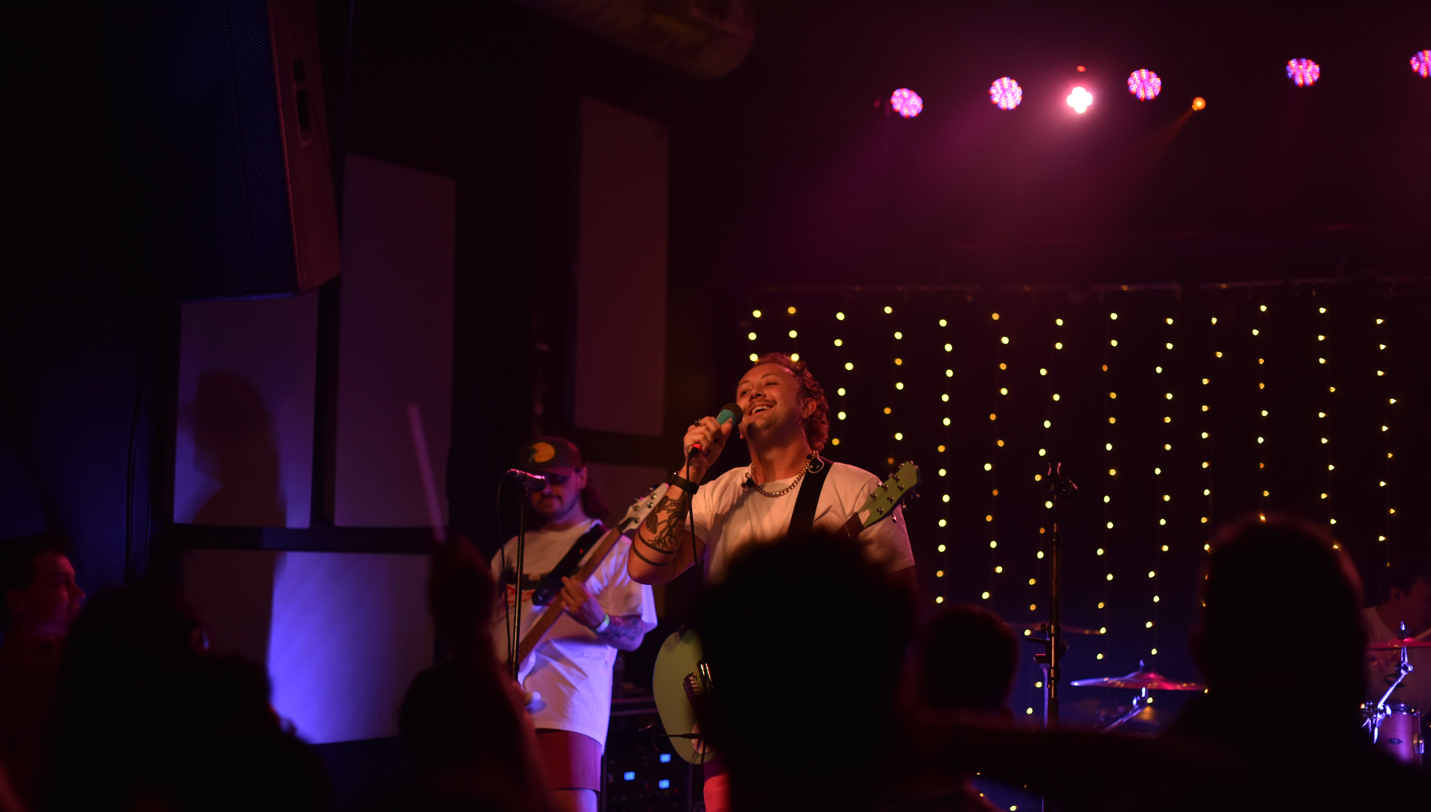 Creating early auditory connections might be the last thing parents think they’re doing when casually deciding between Joan Jett or The Rolling Stones to play on the car ride to school. The commercials using radio rock as background music, old and weathered musical instruments lying around the house or thrifted art pieces hanging in the bathroom may not outwardly birth a prodigy, but for the Bolin brothers Drew and Reed, this is what started it all. The Bolins’ household is surrounded by items that influence creative exploration, and although the Bolin brothers and Kyle Grant weren’t raised together, they unknowingly experienced a very similar creative childhood. With Kyle Grant absorbing his father’s music choices or watching VH1 music videos, he found himself magnetically drawn to the world of music. With a guitar gifted from his grandmother, Kyle Grant found friends Drew and Reed who quickly became family and it felt much like what they would eventually call their pop-rock band: Practically Paradise.

Despite their vastly different music preferences, from hardcore to pop, the three friends started this journey to just create music that feels right at this moment in time. Knowing this, the trio thought Practically Paradise could end up with a unique sound and they were right. Their debut single “On Read” takes off with a pop-rock guitar intro with a style that sounds straight from Nashville, and builds up into a story of “ghosting”, an annoyingly relatable sentiment for anyone in today’s dating scene, but it’s much more than what can be told on a relationship level.

Kyle Grant elaborates, “Everyone wants to be heard, to be acknowledged, to know that they aren’t alone in the world, especially in a world that’s become so divided through the development of social media. This void has never been felt in the generations before us, so the negative effects of feeling unwanted and left out to dry are exponential. We hear you, and we understand. You aren’t alone.”

Honestly I think my friend’s 9th birthday party was rockstar themed and we put fake tattoos on and put on a show with everyone. I think that was when I decided I wanted to do this. I was already learning guitar at the time too so it just solidified it I guess.

Practically Paradise is a band from Greenville, SC that grew up with varied influences and still has varied influences. Tyler, the vocalist, started this group as a way to channel his emotion and to connect with people. Practically Paradise is a group that at the heart of it is having fun and loving what they do. Connecting with the audience and showing that we are going through the same things that everyone else is and that even when you feel absolutely alone, you aren’t alone and we are all together in this life.

I’d love to say that we’re very open and love to interact with fans!  If you come to the merch table you might not always find me there but one of the guys will be there and we’ll talk with you all night. We love our fans, we love interacting with them and we love getting to know them all. Without our fans we wouldn’t have nearly as much as we have with them. Also we’re always there for our fans, any of them can reach out at any given time and I would gladly talk to them and try and help them as best I can.

Honestly it makes me so happy to hear that, it’s crazy to me. From my old bands that rarely if ever had that to now and hearing that for the first time is just insane.  It just pushed me to go crazy on stage.

My biggest highlight would be from our last show, 100%! I have dreamed of the day when I would hear the crowd singing our lyrics while we’re playing them and the last show, nearly every song that happened. My favorite part would have to have been during nyquil though, we take a part of the track out during the final chorus of nyquil and this last time where it’s silent on stage, you could hear the crowd singing nyquil and I literally lost it, brings tears to my eyes to think about that now. Also that was just our 6th show and I thought that was crazy.

I wouldn’t say hidden honestly, mainly that you aren’t alone, most of our songs have been about things I’ve gone through in the past that have affected me in a way that was hard to put into words until I had them pulled out of me from our producers, honestly music is my therapy and our producers are GREAT therapists haha.

So many honestly! But the ones that really stick out are Eddie and Edan from the score. When I was on tour with them I asked a lot of questions and tried my hardest to learn from them. We still talk and I’ve loved watching them blow up.

I think a great performance engages the crowd and interacts with the crowd well. It pulls the crowd in and gets them involved! Generally the best way to judge a performance or song is based on the crowd’s reaction, if the crowd is moving and screaming with us the whole time, I’m gonna say that was a good performance!

So this varies, a bit haha usually when we’re playing shows steadily, at least once to twice a week for about 2 hours. But we’ve been preparing for the studio and we’ve been working on writing more than practicing.

The two producers Practically Paradise goes to honestly, Wes and Zane have been a huge help and a huge influence on me. I love those guys.

I’m not sure honestly, everything that I’ve done has led me to where I am now. I’d probably advise myself to not go to college (shocking, I know) but I’ve realized my degree (audio production/engineering) is something I could have learned without going to school.

Just how much social media plays an impact on your success. It shouldn’t be that way but it is unfortunately and it takes a huge toll on mental health. I hate doom scrolling and falling into those black holes, I all but swore off tik tok because it was affecting my mental health in such a negative way.

I believe they would describe me as dedicated and hardworking. I’m very committed to Practically Paradise and working on it and making it successful.

I have been described many ways honestly, most recently I was described to be like Donnie from the wild thornberrys, other ways I’ve been described is being very open, always there for you, hard working and dedicated as well but also fun to be around.

I do have some hobbies and interests outside of music! Right now I’m huge on playing apex legends, it’s my go to stress relief honestly, sometimes it ends up stressing me out more than relieving it but that’s how it goes with BR games haha. Outside of that, I love reading and learning, I’m currently learning French and reading Dune! Also the typical working out, hiking etc is some of my favorite stuff to do as well.