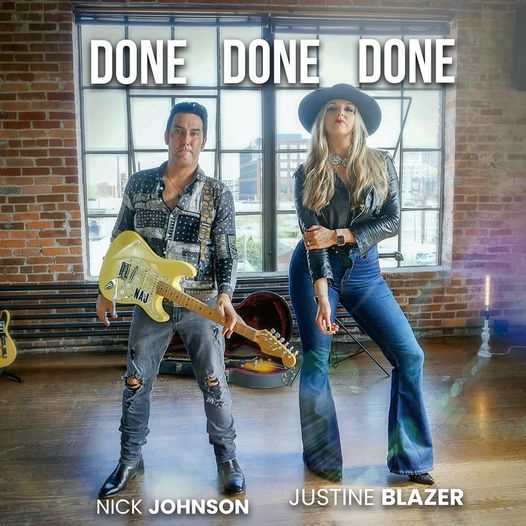 Thank you for being part of our interview process. Honored to have you. We would love to learn more about your new single Done Done Done. Where was it recorded and who produced it?

Justine: Thank you so much!  Yes we are so excited for this release. This song is absolutely rocking. This was recorded and produced at my studio in Nashville, TN and produced and mixed by me. Nick played all the guitar and bass on this track.  Drums by Isaac Velasquez. It was mastered by Machine.

Did you write this new single together and have you written together before?

Nick: Yes we did write this together. It really came together quickly and was a lot of fun.

Justine: So much fun!

How do you know when a song is truly finished?

Nick: I have to say the “goosebump” feeling. You feel the life being brought into the song and it moves you.

Justine: I truly rely on that “gut feeling”. I try not to overthink this. I let it flow.  When you get the “feels” you know it’s done and it’s good!

Please share more about each of your beginnings in the music industry and where you are now!

Nick: I’ve been playing and writing professionally my whole life. I started playing in clubs as a teenager, began releasing my own albums about four or five years now, toured all over, gotten songs in movies, played a million shows for myself and others. Right now I’m concentrating on putting out more of my own music. This is my life’s work and I’m very excited for the next steps.

Justine: I’ve been doing this professionally since the early/mid 2000s. I have worked my way up in the industry. Started off playing little restaurant gigs, coffee houses and eventually worked my way up to national tours, corporate sponsors, a European tour, TV shows and appearances, a publishing deal and now my 2 studio locations in Nashville, TN. I toured for many years, released 7 full albums, played thousands of shows, written and produced hundreds of songs. I am still doing the same thing now as I was back then with just more success notches so to speak.  I do this full time for a living and an entrepreneur! I still love it!

Do you get more attached to some songs over others?

Nick: For me I’m always excited about the new music!  However, I love them all like my kids. There’s comfort sometimes in revisiting things you’ve done. You get a new perspective.

Justine: I personally don’t. I used to but I write so many. I write 2-5 songs a week, every week for years now. I do love my latest work though. I am really excited for these new releases.

Any more collaborations on the way?

Nick&Justine: You never know!? We shall see!

Please share with our readers where you would like them to connect with you on-line and thank you again!