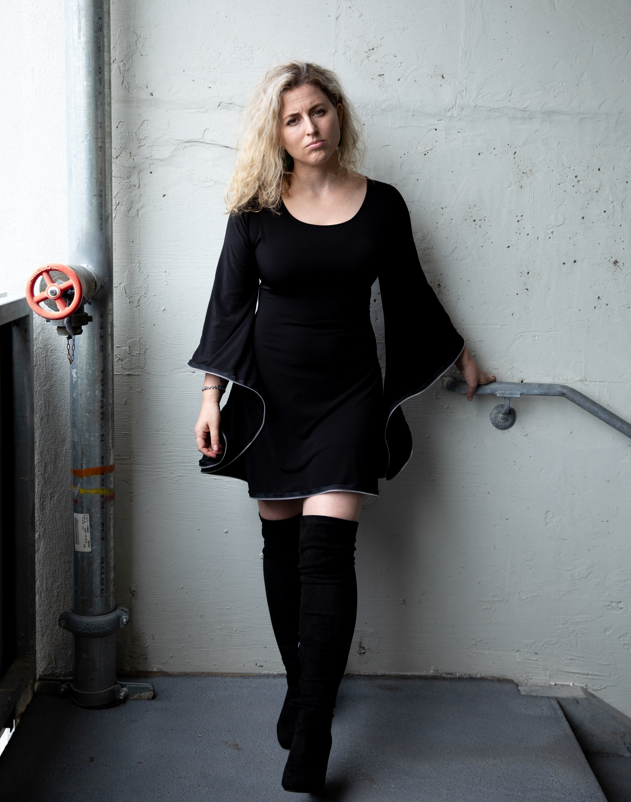 Dallin Applebaum is an alternative songwriter with a knack for melodic piano-driven songs with a dark-humored spirit. Originally based in New York City, she moved to Nashville in early 2022. Dallin has always been drawn to music- she began playing classical piano at a young age and started singing and writing songs as a teenager.  After attending college in New York, Dallin began touring with major pop artists among the likes of Ryan Star & Rachel Platten, in addition to working with recording artists such as Passion Pit, Phil Phillips, Matchbox 20 and many more. Among this success, she also won runner up for Best Folk Song in the John Lennon Songwriting Contest in 2009. . In 2013, Dallin started an electronic rock band called SKYES, who made their way through the Brooklyn indie music scene before she chose to move into writing music on her own. During this time Dallin also wrote and produced pop songs under the alias Alise Indall. Many of Indall’s songs can be heard on TV and film, and “I’m That Girl” was featured in the promotion for the  2018 USA Women’s Olympic teams.

In the process of building her new album, Grey Matters, Dallin began a songwriting club in New York as a place to get together with other songwriters and share ideas. It was through the club that she was able to create a space where she could work through and finish writing all of the songs for her album.

Grey Matters, due out in January 2023, explores extremes as a means to understanding and appreciating what’s between them. Dallin produced and arranged most of the record herself with the help of her husband & a few extremely talented friends.

She will continue to play shows in Nashville, New York and around the country. Until then, she will be releasing singles and music videos from the album.

How would you describe the music that you typically create?

Tell us about your single, “Til Death Do Us Part”!

I wrote Til Death after leaving NYC. I lived there for 15 years, and it really became a part of my identity, it still is in some ways. The idea came about because after years of trying to “make it” I started to really get caught up in the race to become rich and famous. It happens when living in a place like New York. I started letting my ego get the best of me. I felt like the only way to come back down to earth would be to leave, so I did. The song is about missing and loving the chaos, but knowing you can’t stay forever.

What was your thought when you first started to compose the single?

I actually composted the horn part before anything else. I had a vision that I would find one of the subway acapella groups to sing it, but when I demo-ed it with voices it didn’t sound right. I tried horns, which gave it more of a lift, and that felt better.

Tell us about your process. How do you find inspiration when working to a deadline?

I set my own deadlines since I’m not on a label. It’s challenging to follow your own deadlines when they are sort of arbitrary. That being said, over the years I’ve become better at speeding up the time it takes to get into a flow state. Once I’m there, and I’m in touch with what I really want to say, the song will start to unfold itself, and the rest is fairly easy.

How have you been able to use social media for this release?

I use instagram and Facebook to connect with fans, release music videos, etc. I’ll be announcing some shows soon too!

Give us all your socials!