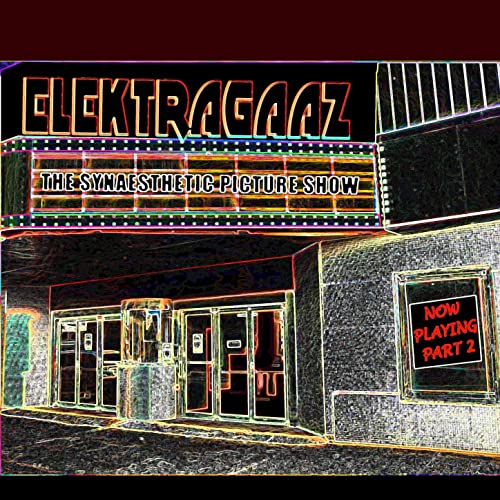 It’s often said that electronica is an acquired taste, but something tells me those who listen to the new EP The Synaesthetic Picture Show – Now Playing, Pt. 2 by Elektragaaz this June are going to walk away with a very different opinion of the genre’s modern look. Elektragaaz mix a lot of old-fashioned electronic, avant-garde, and even noise influences into their hybrid sound here, but in its totality, The Synaesthetic Picture Show – Now Playing, Pt. 2 is too eccentric a work to live outside of the contemporary electronica umbrella. Alternative music fans can collectively get behind this record, and if you’re keen on the underground, you know how rare a statement that is for any critic to make.

The rhythmic moments this EP includes are both endearing and elastically beat-driven so to make you crave the dancefloor, but I don’t know that songs like “Sister Sangfroid” or “Spanish Moss and Mysteries” were made exclusively to garner a hip-shaking reaction from the audience. No detail is spared within the concepts we hear come alive in The Synaesthetic Picture Show – Now Playing, Pt. 2, and were any of these tracks produced for singular purposes, I don’t know why Elektragaaz would have gone to the trouble they did in making each one as unique as a winter snowflake.

Though the fluidity of this record is never in question, there are aesthetic-based differences in the design of “Presentiment,” “Reflections in a Funkhouse Mirror,” and “Achilles Back from the Dead” you can’t ignore, no matter your knowledge of the pop spectrum. For what Elektragaaz are working with, they aren’t letting even the subtlest inch of sonic space go unutilized in this mix – they’re filling every corner with an exoticism, evocative melody, or outright outrageous instrumental volley just to keep us on the edge of our seats.

The Synaesthetic Picture Show – Now Playing, Pt. 2 exhibits its players making fine use of rhythm and rallied harmonies to advance a mood where lyrics are completely absent, but I’d like to note they never rush into something to yield anxiety in the listener. Even in moments that were clearly meant to have a certain melancholic overtone to them, cheap tricks are never a part of the master plan Elektragaaz have sitting in front of them in the studio. Indie or mainstream the same, this isn’t common in pop anymore (not that it ever was among the less than erudite).

I’m really stoked to hear more from Elektragaaz in the years ahead, and if their first proper full-length is a true embodiment of the two EPs they’ve released in 2021, they could have the kind of influence over this next era in electronic music icons are made of. There are still more than a couple of rough edges to their style, but in a genre that has welcomed a lot of simplicity and straightforwardness for far too long now, what they break off in The Synaesthetic Picture Show – Now Playing, Pt. 2 could undeniably help to shake things up.