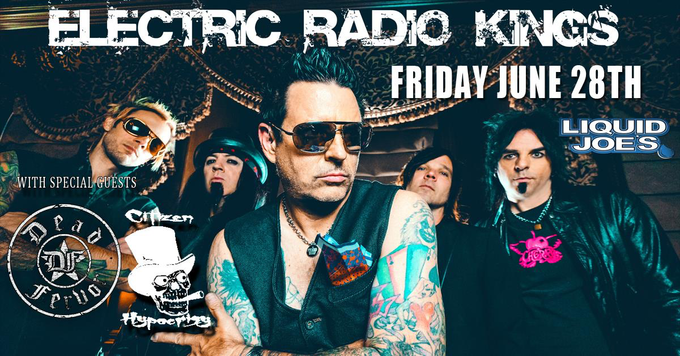 Electric Radio Kings have just released their highly anticipated new album “PURRR.” Produced by long time Metallica engineer Mike Gillies and released on Grand Vision Records, “PURRR” is being  sold exclusively through the Electric Radio Kings official website. The band has just signed with MI5/Universal and is taking the music industry by storm.

What makes Electric Radio Kings gain popularity and fans quickly is their combination of many great mixtures of music. With the echoes of past and present ala Cheap Trick, Foo Fighters, Stone Temple Pilots and Guns N’ Roses: Electric Radio Kings reaches a huge demographic. ERK unleashed their much-anticipated new single “Back to Black” via Landshark Promotion in March of 2019 to rave reviews and massive radio airplay. The track is a remake of the amazing Amy Winehouse hit. Their second single from the new album “PURRR” entitled “Jack Black Flower” has recently hit the airwaves and is creating rock and roll pandemonium on radio stations around the world.

Don’t miss one of the  most entertaining Rock and Roll indie bands in the world, get your tickets for The Electric Radio Kings show at Liquid Joe’s in Salt Lake City, Utah on Friday June 28thhere:

Check out the new music video for “Jack Black Flower” by the Electric Radio Kings here: