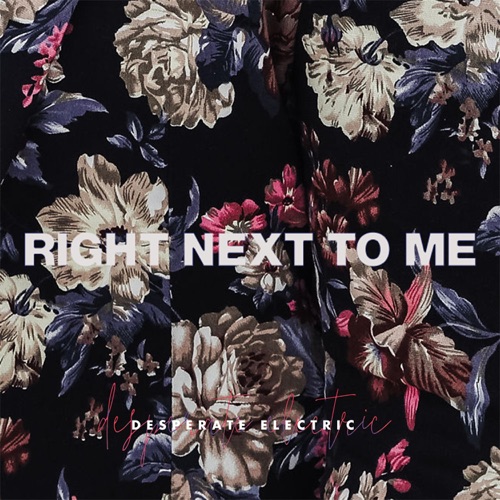 Desperate Electric releases “Right Next to Me” (single)

Montana based Desperate Electric’s new single “Right Next to Me” is the latest intelligent gem from a duo whose electro soul musical style has captured the attention of anyone who has heard it. Ben Morris and Kayti Korte began their musical journey together in a four piece named Dash that, through unforeseen attrition, transformed into the current duo. They cull the latest single from their new album Still Not Giving You Up released in early May of 2020. Morris and Korte are making a deep impression on everyone that hears them and this new single sounds like an ideal track for expanding their public and artistic profile.

Some clean and jangling yet melodic guitar opens the track. It is a brief but strong introduction to the song before the pulsing electro beat begins and Korte’s bass locks in with the tempo. Morris’ production gives the track an immediate sound without overwhelming listeners and highlights Korte’s vocals with dramatic clarity. She doesn’t have classic soul style pipes, but it’s only a limitation if you have a limited view of what constitutes soulful singing. The way she brings emotion to bear with her own idiosyncratic style and unquestionable power engages the emotions with a single listen.

Her phrasing is more subtle than you might hear at first. She has an innate instinct for exploiting the possibilities of a song lyric and certainly elevates these. It isn’t the lyrics are subpar without her contributions – instead, it is closer to say that a great singer needs solid material to work with and that Desperate Electric’s material serves her needs well. Her emotional intensity peaks with certain words, falls on others, and never sounds forced or overwrought.

The track runs over five minutes in length but there’s no sense of wasted motion marring the recording. Desperate Electric, likewise, are talented enough to subsume their influences into the songwriting to such a degree their sound is familiar yet never imitative. Bands capable of making their frame of reference less than obvious deserve our attention.

“Right Next to Me” makes the unusual straddle between unique artistry and mainstream appeal. The commercial merits of the track will be obvious to many. Some may disagree and think the song is too quirky and distinct for faceless national popularity, but there’s no question there’s a lot for listeners to latch onto in the arrangement and performance. The duo, now a national touring act, is receiving a great deal of attention and this is likely to continue.

Nothing about Desperate Electric sounds fly by night or doomed to burn itself out quick. “Right Next to Me” deserves a wide hearing and any fan of well-crafted instrumental passages and overall songwriting will appreciate its value. Montana isn’t where you think of when you wonder about what American states are producing some of the most interesting new acts in popular music. Desperate Electric and their new single “Right Next to Me”, however, dispense with the idea it is some sort of musical and/or artistic wasteland.