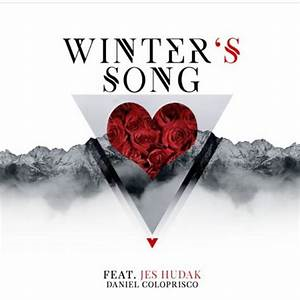 Amidst the chill of a wintry piano’s gentle keys, the sultry singing of Jes Hudak cuts through the cold with a tender embrace that enhances the mood of Daniel Coloprisco’s “Winter’s Song” like nothing else could. Her energy is soft, but her delivery is quite sharp and on-point, equaling the precision of her partner Coloprisco and driving forth a harmony that will stay with listeners long after the song has stopped playing. “Winter’s Song” is one of two tracks on the new extended play of the same title, it is absolutely one of the few in the pop genre that I would deem worth a second (and third) listen.

The title track in Winter’s Song is the most crushing from an emotional standpoint. In terms of stylistic diversity, we find some balance in the second song on this record, “A Touch of a Feeling,” that might be even more interesting than the first. There is no singing in this track, and frankly it doesn’t need it – “A Touch of a Feeling” is the sort of song that would seem inappropriately bombastic were it layered with guitar solos, drums or a sensational lead singer at the helm of the mix. This track lets Coloprisco do what he does best with his piano, and it’s just as marvelous a listen as “Winter’s Song” is without a doubt.

Extended plays that are as short and sweet as this one is find audiences that don’t need to think twice – Daniel Coloprisco’s Winter’s Song EP is a beautiful, charmingly innocent hybrid of classical themes and contemporary textures that lives up to all of its hype and then some. I hadn’t heard of his work before being introduced to it just recently, but from the looks of this first offering, he’s got the sort of skillset that could produce some legitimate treasures in the next couple of years. This is a great start, and I have a feeling that I’m not going to be the only listener who thinks so.