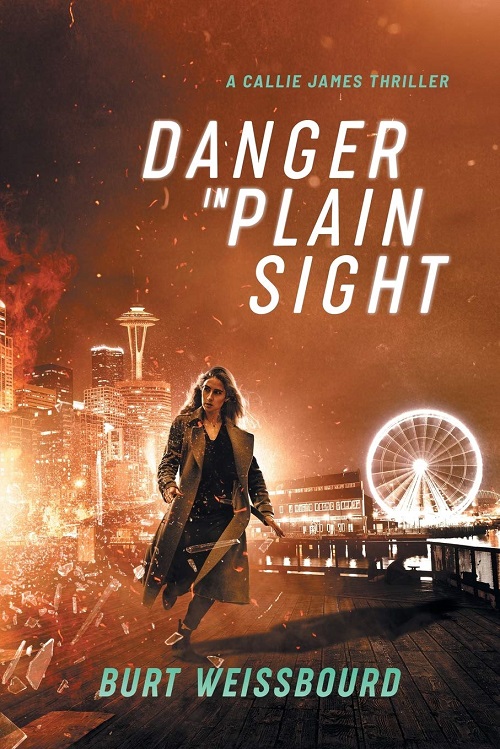 Burt Weissbourd has donned many different hats over the course of his professional life. The Yale alumni studied finance at the Northwestern University Graduate School of Business before abandoning his academic pursuits in favor of relocating to Los Angeles and launching his own movie production company. The company produced the films Ghost Story and Raggedy Man, among others, and Weissbourd worked as a screenwriter as well before shuttering his production company in 1986. He founded his own investment company in 1987, still in operation today, and later began writing novels.

He is no newcomer to series characters. Weissbourd penned three novels featuring protagonist Corey Logan and the main character of his new novel Danger in Plain Sight, Callie James, is his next attempt at a series character. It isn’t often that male writers latch onto a female as the lynchpin for a potential series but I believe Weissbourd does an exceptional job creating a believable female protagonist without falling back onto formulas or clichés. The novel features a diverse cast of characters Weissbourd portrays for readers in believable fashion.

Weissbourd obeys all the fundamentals for what makes a good or great thriller. His “heroes” are pursuing a clear objective, the antagonists have their own objectives as well, and Weissbourd throws in a number of obstacles for his protagonists to overcome along the way. The suspense draws readers in and he does a five star job with the book’s action sequences. His skill as a writer is obvious and there’s a level of polish present in these pages you don’t find with less experienced authors.

Some of the characters are unquestionably successful while some fall flat. I take greatest issue with the character Daniel, Callie James’ ex and father of her only child, as he only rises above the level of the arrogant Frenchman cliché near the book’s end. Weissbourd tells us far too often and shows far too little about his arrogance. I am a fan, however, of the third person point of view he adopts for the book – without it, the cinematic touches throughout the narrative would not be present.

The prose has a tight conversational feel rather than taking on ill-fitting diction and, coupled with the book’s length, should make this a book many will devour in a single sitting. This doesn’t mean it is a shallow reading experience; as I mention earlier, Weissbourd’s skills are evident throughout the entirety of the book and he has an understated way of deepening character without veering off course. Danger in Plain Sight has much to offer readers and lovers of series characters and the thriller genre alike will find a lot to admire in these pages.

It’s a solid debut for Callie James, Seattle restaurateur, and an associated cast of characters we can expect to meet again in future books. Danger in Plain Sight sets the stage well for Burt Weissbourd to have an impressive run with this character and he will undoubtedly attract a growing audience with each new additional entry in the series.