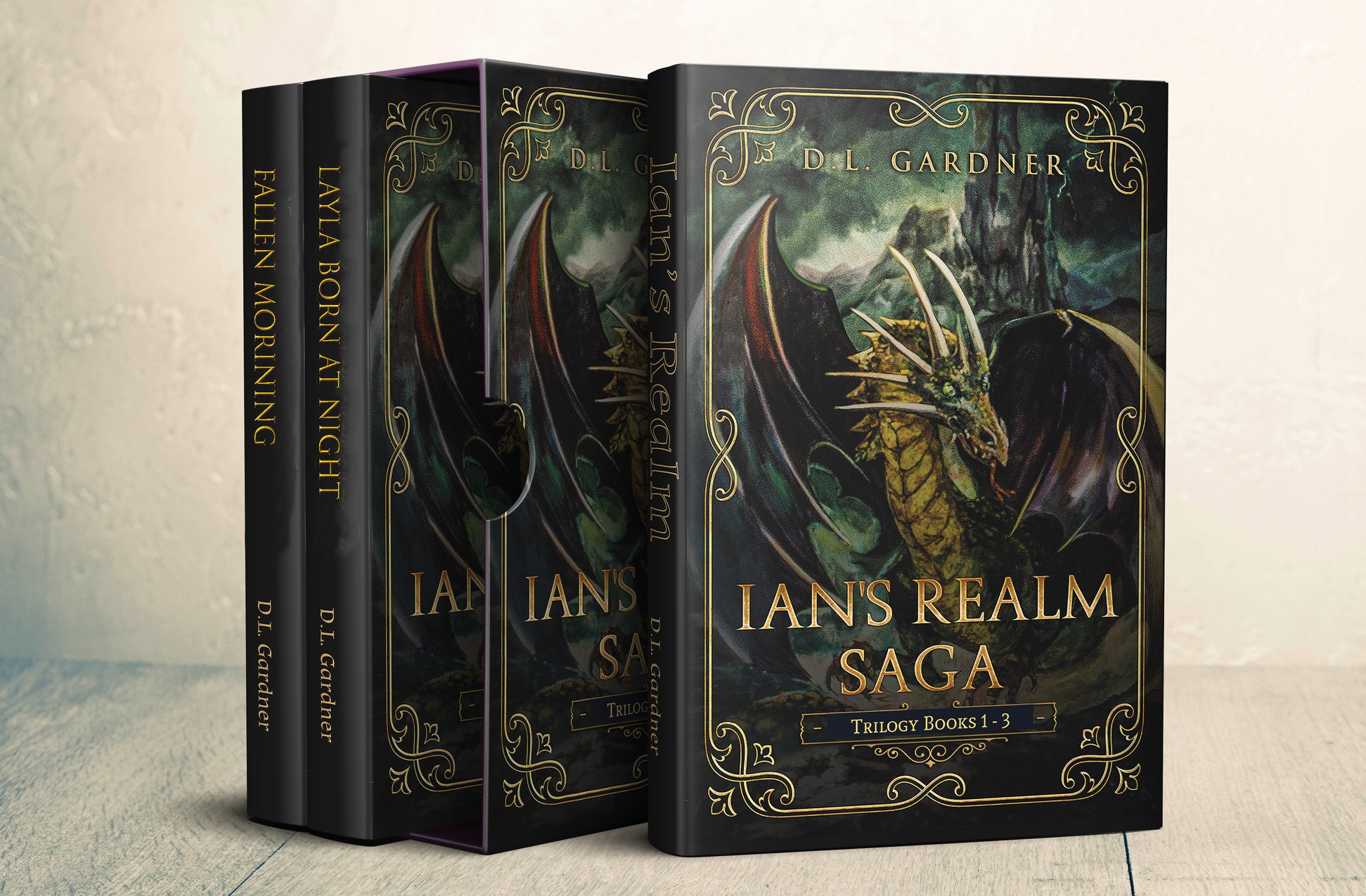 D.L. Gardner’s creative outburst producing the five books in her Ian’s Realm series began in 2016 with the publication of its first volume Deception Peak. Fantasy series fiction has enjoyed unprecedented popularity in recent years with the success of characters like J.K. Rowling’s Harry Potter, Rick Riordan’s Percy Jackson, and HBO’s adaptation of George R.R. Martin’s A Song of Ice and Fire series as Game of Thrones, among others. It is no small wonder their success inspired writers such as Gardner to try their hand at epic fantasy. Gardner’s Ian’s Realm Boxed Set includes the core trilogy of books, Deception Peak, The Dragon Shield, and Rubies and Robbers, but there’s more. The boxed set concludes with Gardner’s recent additions to the story Layla Born at Night and Fallen Morning. Coupling these works together in one package amounts to almost one thousand pages of text but fans of the series will be pleased to have the entire story available in a single volume.

The first book Deception Peak does a solid job of setting the stage for everything that follows. Gardner introduces many of the pivotal characters and story arcs for the series in this opening entry but experiences mixed success establishing her fictional world for readers. Many will take issue with its minor failures of imagination; the Realm will prove too often indistinguishable from our own world. Gardner passes up opportunities to draw distinct contrasts between the two worlds of her series and the familiar iconography of our reality. Even minor contrasts might address this issue. It is a recurring issue throughout the series and one only needs to look at some of the aforementioned examples to note how other writers invest enormous amount of imaginative capital creating unique worlds quite unlike our everyday realities.

The second book in the series, The Dragon’s Shield, is one of the strong points in the series. Gardner’s skills depicting action are present throughout the first book but chapters in the second such as “The Dragon’s Lair” and “The Caves” stand out as exceptional climatic peaks in the series. It begins on a romping note with the first chapter “The Chase” and interactions between her large cast are credible and dramatic. One should judge the literary and storytelling merits of this series based on the genre it inhabits and, by this measure, Gardner is a clear adherent to tradition and wrings few new changes to time-tested formulas and archetypes. Some readers will find this disappointing, but others will enjoy the predictability. There is no question of Gardner’s comfort with the style. She resolves her narrative threads with genuine skill.

The third book Rubies and Robbers benefits from Gardner’s growing confidence with character. Story is one of the abiding strengths of the series and this final entry in the initial trilogy brims over with a variety of obstacles to overcome and quandaries to solve. “Trouble” is one of the highlights of this book. Books 3.1 and 3.2, Layla Born at Night and Fallen Morning respectively, introduces some new characters joining the existing dramatis personae. The relationship between the characters Ian and Abbi, an unquestionable focal point of Ian’s Realm, approaches its logical conclusion in these books, albeit not without struggle and trial. Gardner’s same penchant for depicting action in a convincing way serves her well in chapters like “The Dragon” in Layla Born at Night and “Prologue”, “Fire on the Mountain”, “Siege”, and “Challenged” in Fallen Morning. Fallen Morning falls flat in an assortment of places, but always for a brief time, and overall rates as a fitting conclusion for the series. D.L. Gardner’s grand ambition for the series pays off in multiple ways and the flaws present in the work never undercut its quality in a fatal way.