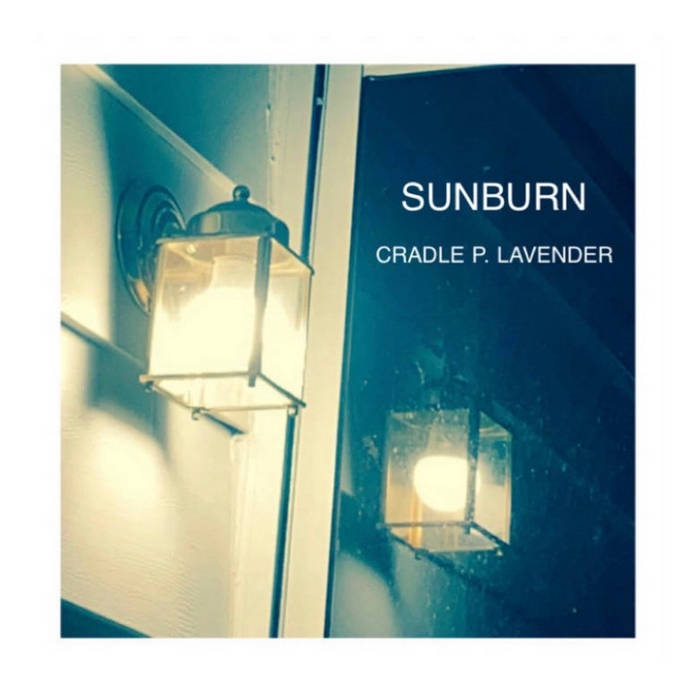 Cradle P. Lavender is the alias of Wisconsin musician Trenton Houck. Under this alias, Houck records indie rock with an intentionally lo-fi production technique, similar to early Soccer Mommy, Julien Baker and Lucy Dacus. His lyrics are macabre but also deeply poetic, and while Houck himself identifies as queer, the four songs on his debut EP, Sunburn, lean more towards the gritty than the empowering. The EP was produced, mixed and mastered by Micky Rosenquist at Underground Squirrel Studios in Rockford, IL.

What we get on this project musically is honestly quite brief and rather spare. Houck definitely emphasizes emotive lyrics and strong songwriting over musical accompaniment, as he does to brilliant effect on the title track “Sunburn.” He sings in a low, baritone drone until we reach the verse that goes, “I’ve ruined my body and burned all my clothes / Erased every word that I’d ever wrote / I’m tired of talking my throat’s getting sore / Yet I scream and I drone all in hope that you’ll watch me explode.” Call me easily impressed,, but I found the imagery to be very moving, and yes, poetic. The ambient guitar tone that sounds like it came from an old victrola supplements the song with extra warmth, making this my favorite Cradle P. Lavender song.

“Bodyguard” features quieter guitar and slightly louder vocals. This time, Houck sings in a leathery voice, “I’ll be your bodyguard, you’ll be my angel / Your heart in my hands, my blood in your veins” and “Body displayed, hung on the wall / Dragging a corpse through the parking lot.” I assume that the “I’ll be your bodyguard” part of this cut has to do with protection against gay-bashing. Sad to say, this musical arrangement is not as potent as “Sunburn,” but its message will resonate with those who can relate, myself included.

The first and only time we ever hear percussion on the EP is on “Thank You.” Lyrically, it reads like a darker version of Alanis Morissette’s “Thank U,” but pop rock this song is not. It’s definitely rooted much more in a homegrown indie rock style. That’s not to say that the drum beats and vocal performance don’t take influence from pop, though, even with the lush guitars. Finally, Houck goes all-acoustic for detail-driven “Running Water.” Again, there’s no percussion, but this sounds noticeably more produced than the other songs on Sunburn. The guitar is also more major-key, and I love how that tone contrasts with the pleading tone of this track’s hook, “And I’d appreciate some help / I’d appreciate some help / Right now.”

It’s interesting how Houck has said before that he was reluctant to pursue a singing career at first. However, now that he’s come into his own, you can bet that Cradle P. Lavender is going to be putting out more music that will help to expand their sound! This is strongly recommended listening all the way through.