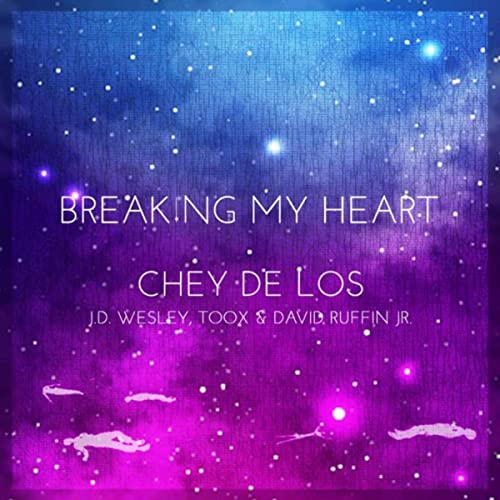 Throughout the history of R&B, there have been defining moments, genres and players who have advanced the genre in a different direction than many had envisioned it going, and while it’s debatable whether or not Chey De Los is doing as much in “Breaking My Heart,” one thing is inarguable – his is one of the best jams of 2020 thus far. “Breaking My Heart” opens up with a heartbeat-style pulsation and ebbing bassline that will intertwine with each other on more than one occasion in the next four and a half minutes of play that follow. The melodic ribbonry is sleek and cosmopolitan, while the rigidity of the beat is seductively unbreakable, and for progressive hip-hop and R&B aficionados, the combination is an unrivaled winner this June.

Chey De Los brings David Ruffin, Jr., Toox and J.D. Wesley into the fold for this studio effort, but there’s never any questions as to what the most important component of this song is. The acrylic texture on the synthesized parts of the harmony is startlingly evocative, drawing something out of every time we run into the chorus head-first. The vocal melodies at this juncture of the track are straight out of the Mark Morrison/Nate Dogg playbook, but while their roots can be traced to the LBC-style G-funk of the early 90s, maintaining the compositional integrity here wouldn’t have been possible pre-2019. There’s too much of a surreal bend to the foundational beat, and moreover, the relationship between the drums and the vocals, for anything like this to have existed before the rise of modern studio tech.

That said, there isn’t a thing about “Breaking My Heart” that sounds artificial – in all honesty, this is actually one of the more impressively barebones, unfiltered performances out of an underground source you’re going to find in the hip-hop and R&B genres before the summer expires. At the bottom of the mix, we’ve got a bassline that is bludgeoning us across every verse without skipping a beat, while flanking us on the left and right we’re presented with drums and bittersweet vocal statements that collide to make a rather emotionally-jarring effect where we’re least expecting to encounter one. The mathematics of this track are complex to put it very mildly, but that could be why it feels so off the cuff and charismatic this summer.

If you’re looking for a crossover single that has a heavy hook, white-hot lyrical emissions and vocals that are as velvety as they are confessional, Chey De Los’ “Breaking My Heart” should be considered required listening right now. Chey De Los doesn’t try and outdo the entirety of his competition in the mainstream here so much as he works to establish himself as his own artist beyond question, and for my money, he accomplished the latter rather seamlessly. He’s still got a long way to go before he can claim supremacy over some of the biggest names in the game, but with this attitude, I’m certain he’s going to go far in the next few years.