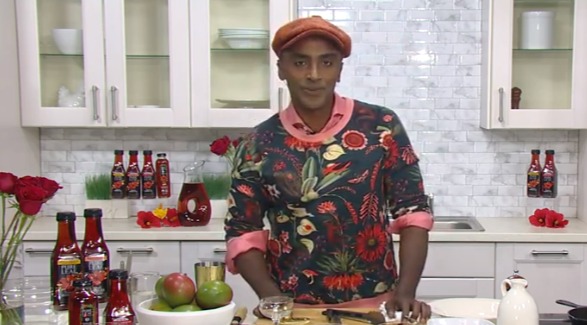 Chef Marcus Saumelsson has had an extremely accomplished career.  He is a famed and critically acclaimed chef, cookbook writer, memoirist, restauranteur of many places including the hugely successful and seriously yummy Red Rooster in Harlem, as well as being a staple in the media of all things food.  And something lovely about this gifted chef and personality is the fact that he is almost always smiling.  Perhaps he knows something we don’t?

The back story of Marcus Saumelsson is fascinating.  He was born in Ethiopia.  After his mother died, Marcus and his older sister were adopted by a Sweedish family.  He was always interested in cooking and studied at the Culinary Institute in Göteborg in Sweden.  At the age of 24, her was the youngest chef to receive a three-star rating for his work at Aquavit in New York.  in 2003, he was listed the Best Chef in New York City by the James Beard Foundation.

He has also published Yes, Chef, a memoir co-written with journalist Veronica Chambers and Make it Messy: My Perfectly Imperfect Life.

Chef Marcus Saumelsson spends a lot of time on television.   He has had his own shows including Inner Chef and Urban Cuisine. He was a contestant on Top Chef Masters,  and The Next Iron Chef. He is a frequent guest on Today, CNN, MSNBC’s The Dylan Ratigan Show.  He often lends his palate to judging duties on Top Chef, Iron Chef USA, Iron Chef America, Beat Bobby Flay, The Taste, Cooks vs. Cons, The Kitchen, Star Plates and Chopped.

He appeared in an episode of Anthony Bourdain: Parts Unknown with Ethiopia being the destination in 2015.

His newest show No Passport Required began in 2018 and shows him going around different neighborhoods in America and tasting and talking about the cuisine.  The next season will be airing soon on PBS.

Philanthropy is incredibly important to him.  He serves as a UNICEF ambassador and founded  the Three Goats Organization with his wife Gate (Maya) Haile and is on the board at City Harvest.  However, it is his work with Careers Through Culinary Arts Program (C-CAP) being nearest and dearest to his heart.

The charming and accomplished Chef Marcus Saumelsson spoke with Michelle Tompkins for The Hollywood Digest about his new show No Passport Required, how to get the best dining experience from Red Rooster, what makes C-Cap so important, the adorable thing he likes to do for fun, how to make romantic meals using Pure Leaf herbal iced teas and more.

Chef Marcus Samuelsson may be found here and learn more about Pure Leaf and get recipes here.