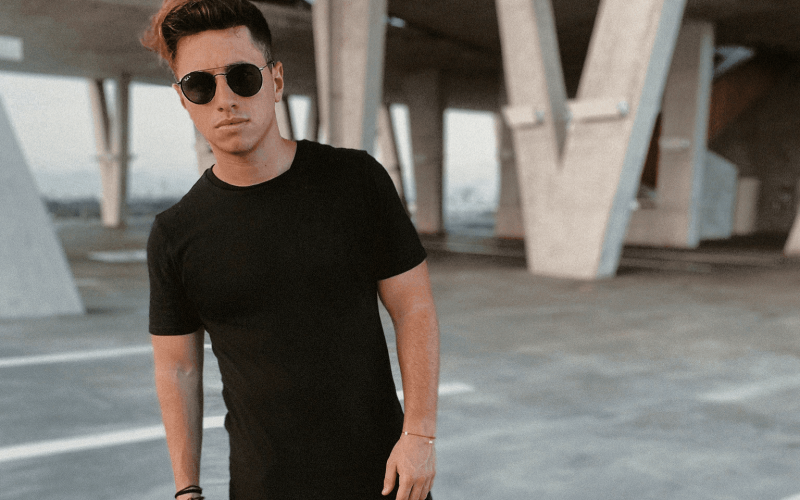 Centineo presents a package unique in the musical world today. His new single “Fearless” features both a monologue and accompanying song. The monologue is a short meditation on the meaning of fear – false evidence appearing real. Centineo doesn’t overstate his words, weighing them down with heavy handed dramatics, but instead infuses his presentation with an appropriate amount of gravitas. The accompanying video for the track has a moody look, black and white rife with shadows, and has a level of professional polish uncommon for independent musical artists. The use of “false evidence appearing real” is familiar to me and helped strike a chord. I first heard it years ago and thought, unlike many other such acronyms, that it really spoke to human experience. The personal resonance for me helped make this monologue a particularly affecting piece.

The lyric video for the full song “Fearless” is potent. The use of multiple colors, particularly green, makes for a visual experience unlike any video I have recently seen. The lyrical content is particularly on point. Centineo writes with a clear-spoken style that eschews bloated bathos in favor of zeroing in, once again, on universal human experiences. His voice is strong and brings the words to life with ample passion and decisive phrasing. Moreover, Centineo never overplays his hand. There’s no overwrought histrionics heard during his presentation – the passion is easy to respond to but doesn’t push past its dramatic limits.

The contrast between the lyrical content and the music is striking. Few associate such serious examination of a theme. The pulsing rhythms heard throughout the track propel listeners towards the song’s inevitable conclusion and, despite the electronic nature of the backing track, the sound is warm and pulls listeners in. “Fearless” possesses a sweep unlike anything you will hear in modern pop music. Centineo has a superb sense of structure and there is an intense cinematic quality to this song that will prove irresistible to many.

This may be an ideal commercial track in many ways, but it makes an important and personal statement rather than delivering a disposable artistic outing. It is clear, at every point, Centineo is intent on communicating with his listeners first and foremost, but the track accomplishes another key goal. “Fearless”, despite its seriousness, is an entertaining experience from the outset and never relents. This is a musical artist who understands the best songs are those that touch on multiple bases and he pulls it off with little apparent effort.

This is another defining quality about Centineo’s approach. Songwriting and building a track involve many hours and hard work, but talented performers make it sound easy. “Fearless” flows out of Centineo as naturally as breathing and a shimmering love for his art burns through each second of this song. We need more music like this, especially in such perilous times, and the early months of 2021 are a little brighter thanks to a release such as this. I have never heard Centineo until now, but I am certain I will be seeking out future releases confident they will provide the same passion and intelligence.