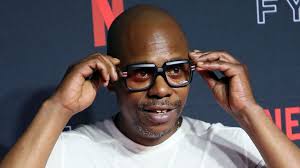 Bradley Cooper called Dave Chappelle “every two days” until the funnyman agreed to appear in his directorial debut, A Star Is Born.

The comedian took questions from the audience during his Broadway show on Wednesday night, with one fan asking him how he ended up in the movie.

Chappelle revealed he was first introduced to Cooper by Kanye West at a London hotel and he was shocked when some time later, the actor showed up at his annual barn party in Ohio and offered him the role of his character’s best friend.

“He sent me the script…,” Chappelle shared. “But I never read the script. I didn’t know the s**t was going to be good!”

Cooper had to keep calling Chappelle “every two days” before the comic agreed to shoot the small but crucial role in the romantic drama, opposite the Oscar nominee and Lady Gaga.

Chappelle previously discussed what a rare opportunity the role presented him compared to his previously work.

“The types of movies I’ve done in my career, they’re always hard comedies,” the 45-year-old told Global Grind last year. “(Directors) will kind of weigh in sometimes but Bradley, the way he directed me and the way we would talk about a scene, the way he would create an environment that would give me the courage to actually be vulnerable in a way that comedy wouldn’t let me be. I never felt threatened or unsafe. He would always tell me sometimes that he would not let me look bad and I believed him.”

Cooper also gushed over their collaboration, and shared with the publications: “I loved our dynamic and I couldn’t get it out of our mind. I knew that he would set a rhythm that I would then follow and edit towards.”