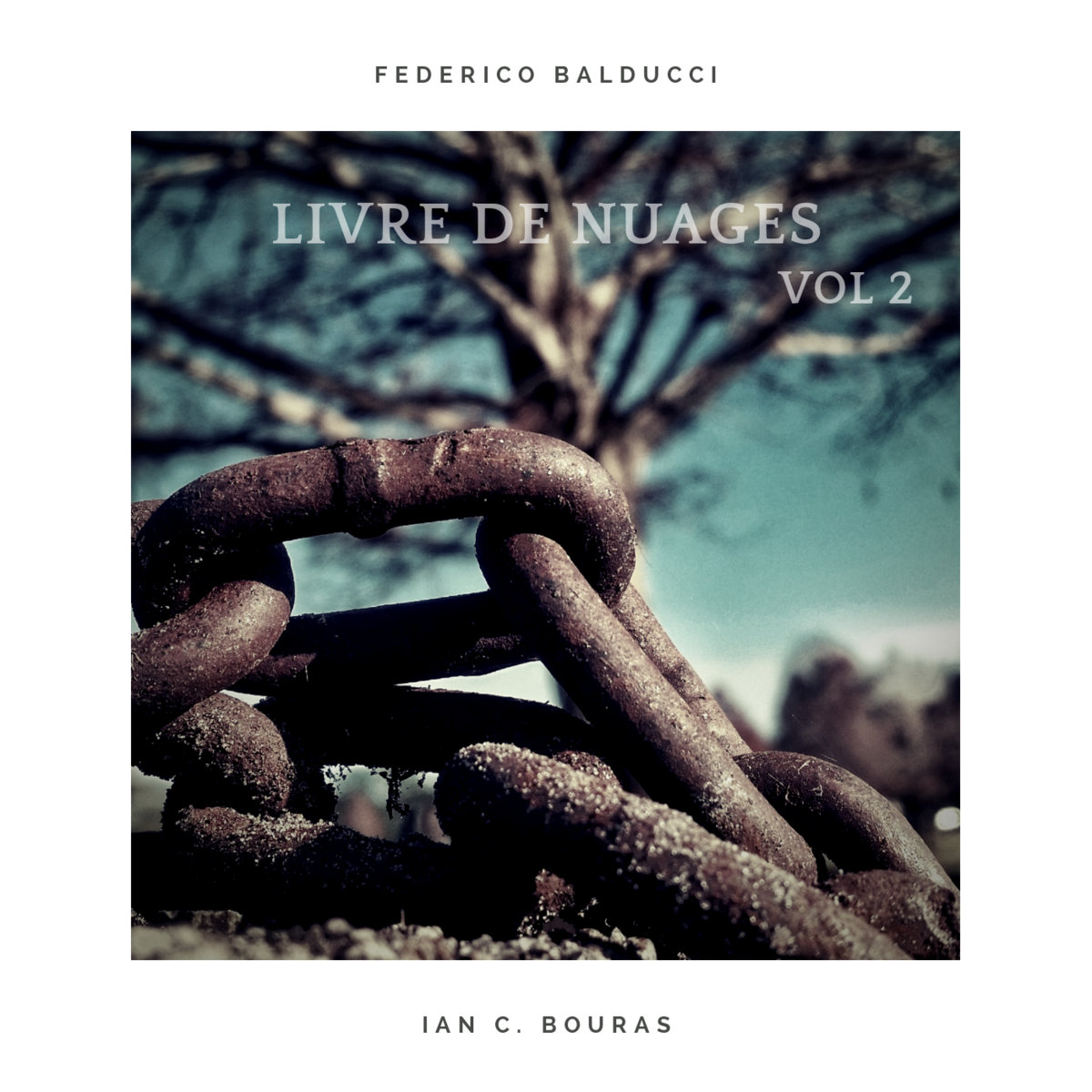 Book of Clouds is an appropriate name for the ambient/experimental duo of Federico Balducci and Ian Bouras. Their second release Heavy Chains features six songs far removed from customary mainstream music but their decidedly idiosyncratic approach to composition never disconnects listeners from sharing aan emotional experience with the music. One can almost call these half dozen songs “mood music” and, if the label fits, the duo are unafraid to explore a variety of moods. Bouras, an accomplished guitarist in his own right, instead handles the sound effects for the duo and guitarist Federico Balducci acquits himself on a high level throughout the course of this release.

There is a conceptual air surrounding the release but its exact contours are unclear. Exempting the first song, “Prelude”, a short ambient piece, the remaining five songs share the suffix “eslabon” which, roughly translated into English, has multiple meanings such as “link” and “steel”. Considering the unified sound of those five tracks, sometimes veering away from the template the duo establish with the second track, one can certainly hear an overarching artistic vision guiding Heavy Chains. This release, to some, may sound meandering and self-indulgent. Careful listening, however, reveals that there is enormous ambition driving their efforts here.

The title “Primer Eslabon” implies the second track is a kind of introduction for what will follow. Balducci’s guitar work puts a distinctive stamp on Heavy Chains. He never overplays and has an unerring instinct for placing notes in all the right places. His guitar sound is obviously rife with effects, but nonetheless never has an overly “stagy” sound. It has an almost painterly touch, full of color, and Boras’ contributions serve the same role a drummer might in a more “normal” musical outfit.

Ayumi Ishito’s saxophone playing on the fourth track “Tercer Eslabon” is a brilliant touch. Some listeners might tire of the esoteric approach the duo take towards music before this point and, if they do, his contributions will do much to regain their interest and respect in this release. It does have a more shadowy emotional gravitas than the earlier tracks, but this doesn’t mean the track represents some sort of descent into darkness or despair. Ishito’s value to this track is immeasurable.

The final track “Quinto Eslabon” runs a little more than twenty minutes and has an enigmatic air. It is a swirl of sound, wrapped in echo, and the steady guitar chime from Balducci rings out like a lighthouse lit through a thin fog. Bouras distinguishes himself here with his mastery of sound and you can hear what sounds like a cacophony of voices rising up through the mix. It ends the release on a particularly dramatic note.

Music like this doesn’t come along too often. Book of Clouds tests the boundaries of what qualifies as “music” without ever losing the inherent feeling within a musical composition. They accomplish something singular with Heavy Chains; skirting boundaries while still touching on tangible human emotion present within each of us. It is a listening experience like no other you will hear in recent memory.