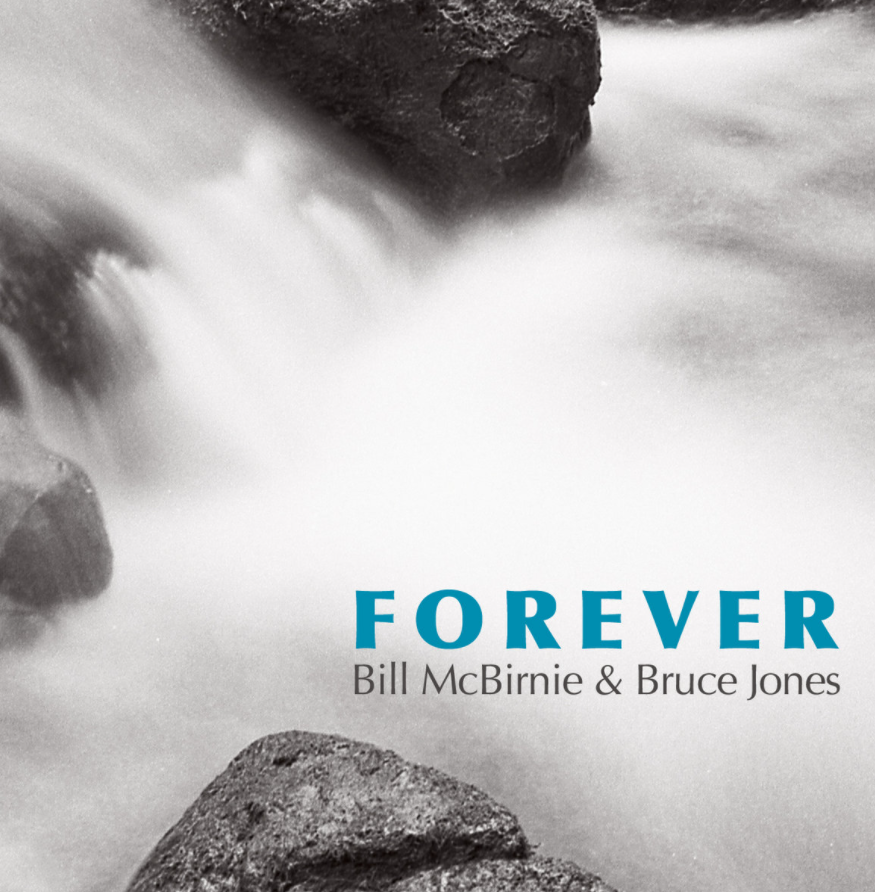 “Criole Blessing (Saravá Criola)” opens Bill McBirnie and Bruce Jones’ latest studio release Forever. The album cover for the release gives potential listeners an idea of its mood; a waterfall rushing to meet a river below. The recording and arguably the material labored under the shadow of COVID to reach listeners today. There are different ways of assessing its effect, however. Its remote recording has no impact on the individual performances or overall cohesiveness. Many admirers of this collection will hear a redemptive bounce present in the songs, an inspired outpouring. It isn’t mournful in any respect but, perhaps, the spirit of McBirnie and Jones’ Forever is akin to the old bluesmen who sang to keep from crying. In this case, they made music to keep from losing their minds.

The result is never frantic or sloppy. “Criole Blessing (Saravá Criola)” is an ideal introduction for the duo’s first-time listeners. It flies gracefully on the back of McBirnie’s effervescent flute playing and additional backing Jones and bassist Robin Latimer offer. The two musicians draw their influences from a rich tradition of jazz, Latin, and Caribbean sounds without ever submerging their work in its clichés.

“Song for Svetlana (Um Choro Para Svetlana)” will be a favorite for many. It has a fiery musical disposition lacking in later tracks though Bruce Jones’ drumming lacks the first song’s snap. It isn’t its only face, however. “Song for Svetlana” shows listeners several different looks during its three minutes and change running time. This diversity is a hallmark of the release. “This Passion (Está Paixão)” is another intense track. Some will prefer it to its predecessor; one attribute differing it from “Song for Svetlana” is the delicate weaving of instruments they maintain during “This Passion”. It isn’t better, only different.

“Forever (Eternamente)” isn’t your typical title song. Such songs, even on a largely instrumental release like this, are often the longest. “Forever”, however, recalls the condensed durations from earlier in the release. Maintaining sharp compositional focus during a pandemic may be one of their biggest achievements with this release. The slight stutter of the song’s initial melody gives it an memorable quality unlike the other songs. “Dreams and Light (Canta Canção)” has a pensive spirit present in its opening and Latimer’s bass playing answers McBirine’s flute with great bass fills. The song’s central melody figures prominently throughout the song. McBirine, however, breaks away into alternate movements and moods.

Some listeners will balk at “Full Moon Blue Wolf” when they hear the first line. The lack of English vocals will be a stumbling block for many who would otherwise enjoy this bonus track. Jones has an emotionally rich voice more than capable of conveying a message despite any barrier. The uptempo thrust of the track doesn’t stop them from producing the same nuanced melodies plentiful throughout Forever. If you are someone who wouldn’t usually listen to instrumental music, this album will surprise you. Bill McBirnie and Bruce Jones have released another in a growing discography of excellent originals.