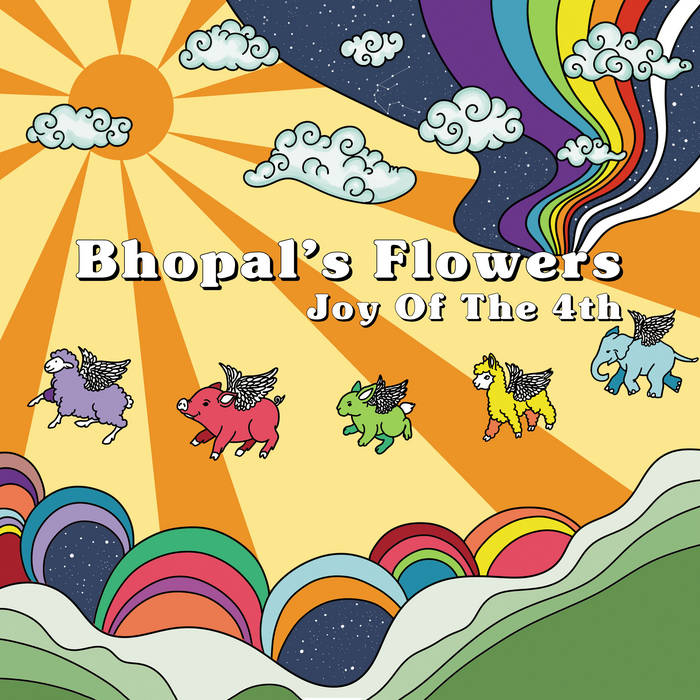 Awash in warm psychedelic undertones, France’s Bhopal’s Flowers reels you in right away with their compelling sound on their latest album Joy Of The 4th that mixes both a Western and Eastern vibe on a truly unique record. The sounds of the sitar and guitars intertwine. Together with frontman Lionel Pezzano’s lush and warm vocals, this combination of dreamy swaths of instruments and vocals makes for a great blend of sounds.

Joy Of The 4th opens up with the title track, “Joy OF The 4th,” where the sounds of the sitar arise to envelop listeners in this track. The sounds float over the sonic landscape of this track and feeling very much a part of the atmosphere. Next, some drums and guitars join in on the sounds. The music has a marching beat as Pezzano’s vocals grab ahold of listeners. There’s tons of warmth to this track as the band’s psychedelic sound washes over you. The sound is drenched in reverb as Pezzano and his bandmates take you there. More shimmering guitars and the sitar comes through the sounds on “Summertime.” The vibe was very ambient. Next, the music becomes more melodic and driven. I was loving the warm, summery vibes here. The combined vocal harmonies also sounded great. Bongos, drums and sitar arrest the sound on “Byrd Of The Tree.” I was instantly getting Eastern vibes here. The mantra-like vocals also clinch this. It definitely added a very mystical vibe that I felt sounded mysterious and enigmatic.

Some mellow acoustic guitar struts to the forefront of “Cool Symphony.” Next, Pezzano’s laidback vocals draw listeners closer to the sounds. This felt more like a stripped back production than the songs previously. As soft vocals carry the sound forward, so does the easy-going music which takes its time in evolving. Some percolating electric beats and the sounds of waves and seagulls arrest the start of “Walking on Rainbow.” Next, some more mellow vocals arrive for a compelling sound. I was reminded of classic rock during the ‘60s and ‘70s. Finger-picking on the acoustic guitar and what sounds like xylophones enter the sounds on “Babyphone.” The immediate sounds of the vocals really set the stage for this track as Pezzano belts out parts of the lyrics in French.

On “Sunflower Castle,” more warm tones come from the guitar and percussion. The lively guitar felt very flamenco-like as Latin vibes wafted into this recording. The soft vocals had a hushed expectancy to it. The sounds of the sitar also light up the sounds here. On the smoldering and slow burning “Running Wild With Us,” the instrumentals come in with absolutely no rushing. Next, Pezzano’s soft and intimate vocals grab ahold of listeners. The shimmering sounds takes its time in unfolding and there was a chill sense to this track that I couldn’t get enough of. Some moody acoustic guitar comes through on “Alright.” The sounds slowly grow in momentum as more instrumentals join in. The music meanders for a bit for a slow burning vibe. Next, Pezzano’s hushed vocals enter and eventually it all comes together for a great vibe. This proved to be a great way for the band to send us off.

Immediately when I hit play, I was met by the band’s captivating sounds. Their dynamic interplay points to a great chemistry and rapport as these seem like good friends happily jamming together. This project connects the East and West together to give off a very multicultural sound that blends in sounds of the sitar with guitars, bongos and more. The sounds the band produces here is such a flavorful blend that I was immediately impressed. by the great sounds that readily unfolds. Filled with a warm and hazy psychedelic vibe, fans of classic and modern rock sounds will surely enjoy this. Be sure you give this a spin today!