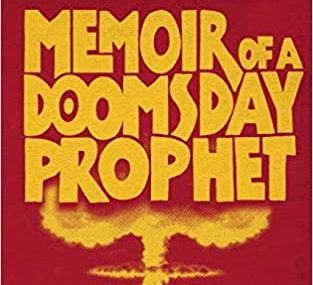 Edwin Block’s days of coasting through life are over. Having failed his latest final exam, his college has placed him on academic suspension. Adrift and facing an uncertain future, he makes the acquaintance of BB, an enigmatic figure who was himself previously suspended from the same school and has returned to campus to exact revenge. His plan? To steal the statue of the college’s early benefactor, Thomas Bartholomew Bradford. Roped into assisting BB with his scheme, the pair soon find themselves in trouble with the law and on the run. What follows is a journey across the country, during which Edwin gradually becomes aware of a strange, fatalistic cult whose leader claims to commune with the Gods and have special insights into the fate preordained for humankind. As circumstances lead Edwin to the cult’s desert compound, he begins to have visions of his own – a moving truck, a nuclear warhead, and images of Lower Manhattan reduced to rubble. It is a nightmarish scenario he would do anything to avoid bringing about. But does he have a choice?

“Memoir of a Doomsday Prophet” written by author Randall DeVallance will be released worldwide through Beacon Publishing Group on Friday, April 16th, 2020. Now available for pre-order in Paperback and Kindle, reserve your copy on Amazon today: