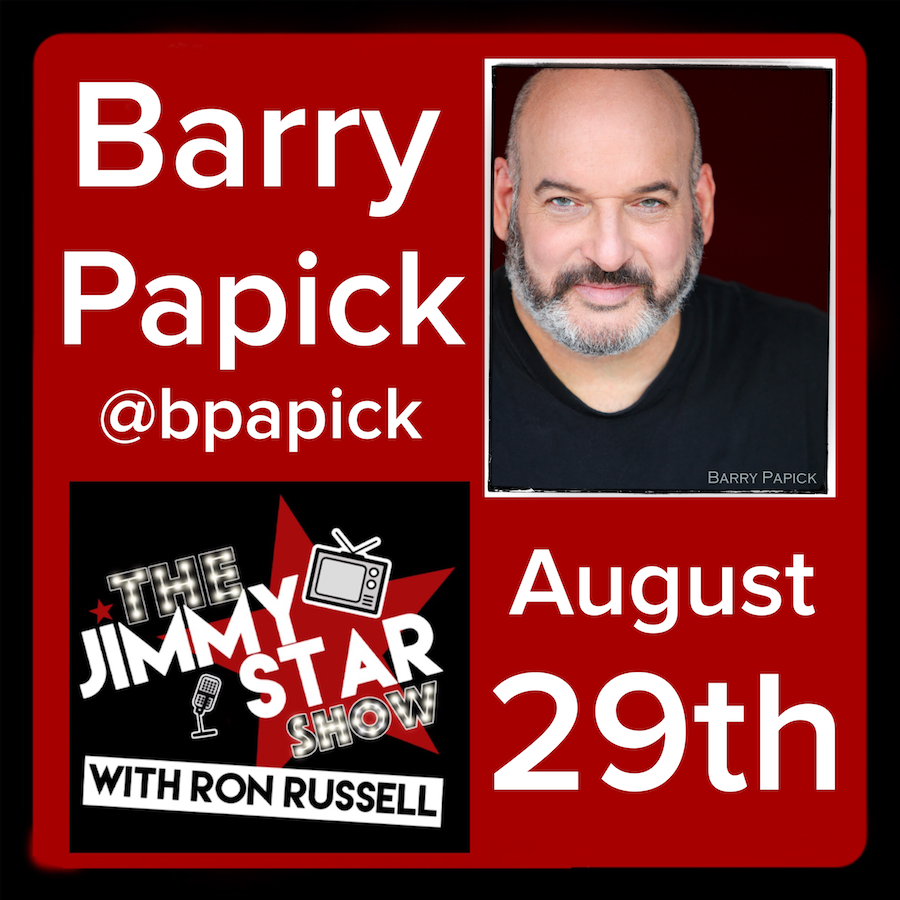 Barry Papick will be a featured guest on The Jimmy Star Show live radio/tv show hosted by King of Cool Jimmy Star along with Cool Man About Town Ron Russell to discuss his career and the entertainment industries at large. The Jimmy Star Show is tv/radio’s coolest hit show, featuring the best in music, entertainment, fashion and pop culture, all from a fun industry insider perspective in a completely live, unedited fast-paced two-hour conversational format.

Barry Papick is an accomplished Acting Coach, Teacher and Actor. One of the top Acting Coaches in the world, Mr. Papick has been teaching and coaching Actors for 25 years. He has recently worked as the On-Set Acting Coach for Dan Pritzker’s soon to be released “Bolden,” coaching the likes of Anthony Mackie and the icon Dick Gregory. He is also known for coaching on Universal’s hit “The Express”, where he worked with Director Gary Fleder (Kiss the Girls, Runaway Jury, October Road.). Mr. Papick was hired to achieve the deepest, most truthful and specific performances from both the principals (Dennis Quaid, Charles Dutton, Rob Brown, Darrin Dewitt Henson) and day players. Last year he was the On-set coach for three feature films (one of the most sought after studio coaches in America). Barry has coached for television shows such as The West Wing, The Wire, Malcolm in the Middle, Body of Proof, Brothers and Sisters, Burn Notice, The Originals and many, many more. Barry has also been the personal On-Set coach for Gus VanSant and Adam Sandler’s Happy Madison Productions. He has worked with many actors including Sean Connery, Rob Brown, Jamie Foxx, Anna Paquin, Lindsey Lohan, Dennis Quaid, Ione Skye, Sonja Sohn, RZA and Darrin Dewitt Henson (to name a few).

As an Actor, Mr. Papick has been in over 20 Feature Films, 20 stage plays and many episodic television shows including “Swans Crossing,” where he was a series regular. Barry has recently been seen in “Labor Pains” with Lindsey Lohan, “Lake Effects” on The Hallmark Channel and has guest starred on many episodics including Showtimes “Shameless,” Youtube Red’s “Lifeline” and the CBS show “Without A Trace.” He can be seen in Howard Stern’s “Private Parts,” Gus VanSant’s “Finding Forrester” and Andrew Niccol’s “Simone.” He has wrapped the feature film “Rejourer” and the Television pilots “The Monticito Motor Club” for Lifetime and “The Mason Twins” for NBC. He is presently the voice of GNC’s Advertising campaign “Beat Average” and has a Head and Shoulders commercial running with NY Giant Odell Beckum Jr.

The Jimmy Star Show with Ron Russell is pleased to showcase the expertise and talent of Barry Papick and all anticipate a fun and informative time talking with him about his career and the entertainment industries at large.

To hear/see Barry Papick live on the Jimmy Star Show with Ron Russell tune in to W4CY radio on Wednesday August 29th, 2018 from 3-5 pm ET and 12-2 pm PT online at www.w4cy.com from anywhere in the world!