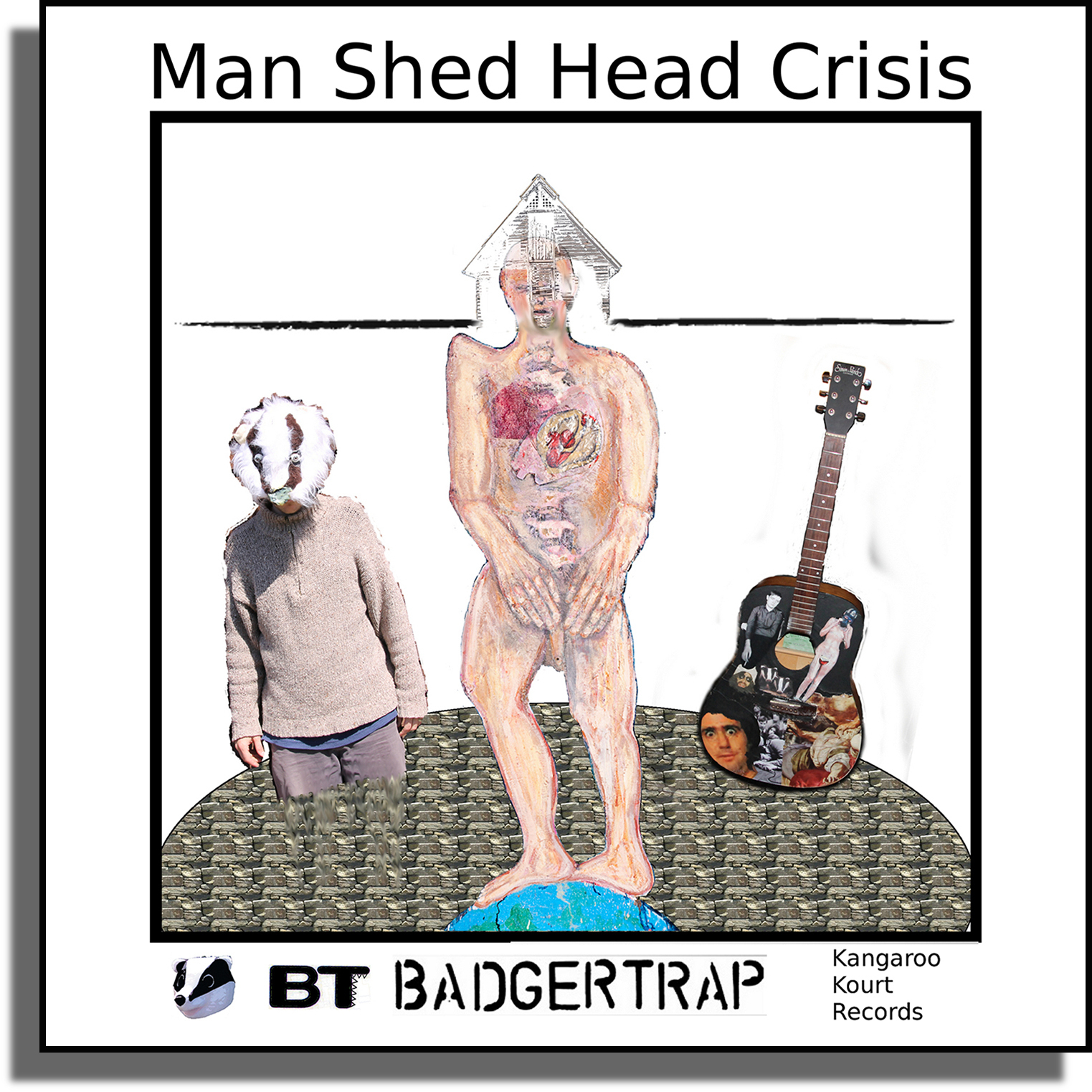 Slinking along to an uneven beat but nevertheless captivating us with its mild grooves, it doesn’t take more than a cursory glance at the first sixty seconds of Badgertrap’s “Just Like School,” one of the dozen tracks comprising his new album Man Shed Head Crisis, to understand why this enigmatic singer/songwriter has gained the cult following that he has in the last decade plus. At times brutally eccentric, but constantly melodic in every way that actually matters, Man Shed Head’s best material – such as “Just Like School,” the retro punker “How Long” and cerebral “Cat Food Ferry” – is steeped in outsider aesthetics, but make no mistake about it; this is one tough LP to put down if you love experimental music.

Badgertrap communicates as much to us via the gritty textures in the string/piano harmonies of “Spandex Boy” as he does any of the lyrics in “Well Up For It,” “Wax” and “No Time for a Crap,” and personally I think that has aesthetically liberal use of physicality to set the mood up in this record is what sets his album apart from the scores of indie gems that have been debuting in 2020. He doesn’t need a lot of frills to make larger than life statements here – contrarily, I think they would only get in his way.

There’s a lot of compositional confidence present in Man Shed Head Crisis that I hadn’t noticed in anything Badgertrap recorded prior to this latest release, and in the case of songs like “Despite Everything,” “Sandwich-Sex” and the guttural “Slug,” the audience is rewarded for his boldness in the form of a pure sound completely untethered to any trends in modern music. He isn’t afraid to get super experimental in this LP, which is something that I haven’t been able to say about a lot of his underground peers this season.

I would love to know where the sonic inspiration for “Scrotum,” “Young Girls” and “Just Like School” came from, mostly just to better understand the unique creative process that Badgertrap has so evidently fashioned for himself since first hitting the scene some years ago. All three of these tracks are on the provocative side from a critical and instrumental perspective, and even without reading into their narratives too deeply, I think that they represent a desire from this artist to express himself by any means necessary – even when it means utilizing the mix itself as an agent of evocation.

If you’re like me and can’t get enough eclectic indie rock, particularly when it’s coming from a highbrow source, then I believe it would be safe to say that now is a great time to be alive, and independent artists like Badgertrap are the biggest reason why. Badgertrap ventures well outside the lines of conventionality in Man Shed Head Crisis, and despite the ambitious stylization of the compositional oddities he forces together here, he manages to turn in what I would call one of the smarter experimental LPs of the year so far in this wonderful addition to his discography.