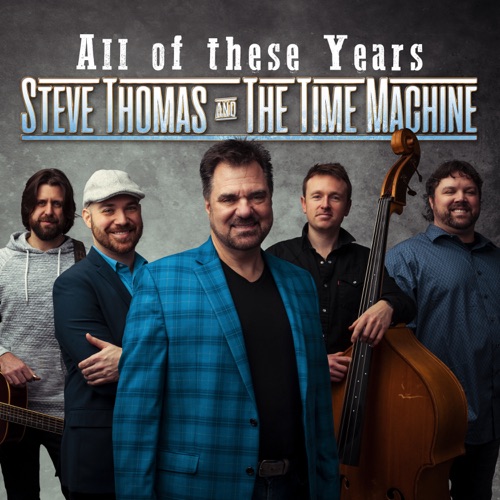 “All Of These Years” by Steve Thomas & The Time Machine

Sometimes keeping things simple can yield more grandiosity in a record that getting deliberately excessive with aesthetical artilleries ever would, and this is especially true of the new album from Steve Thomas & The Time Machine, All Of These Years. If you were to take a song like “The Moon Over Georgia” and fill it with a lot of useless frills and sonic fluff, I don’t think it would feel nearly as powerful as it does with its stoic strings, rich vocal harmonies and uncomplicated tonal expressiveness. “Rocky Road Blues” and “The Rat Race” don’t need electric guitar solos to sear their sensational melodies into our minds for an eternity. There aren’t any big props or fantastical elements that many mainstream country and bluegrass bands would rely on when making new content in All Of These Years; in their place, we find a rock-solid integrity that feeds into the narrative of the music much as the performers’ individual identities do. This is bluegrass for a millennial generation more accustom to deep-thinking music than some might expect, and thankfully it’s arriving on streaming sites and record store shelves at an optimal time this spring season.

There’s a personal connection between The Time Machine and “Lucky Man,” “We’ll Meet Again Sweetheart” and “Far Far Cry” even if Steve Thomas wasn’t leading the charge with his robust vocal. The lyrics in these tracks, as well as those in “Since Love Came Around” and the title number, feel a little more country in spirit than they do bluegrass by design, but this doesn’t lead to artistic discord as we work through the twelve songs in the tracklist.

Contrarily, I think the interesting fusion of influences in this record might be what makes it so accessible to indie audiences and devoted bluegrass addicts alike. The way that songs like “Down In The Wildwood” and “I Wonder Where You Are Tonight” were mixed doesn’t allow for us to debate whether they were conceived with the notion of securing steady airplay or not; after all, every stitch of material on this disc sounds like it could be added to a country/’grass playlist somewhere on the FM dial this month and fit in just fine.

I’ve never been the biggest bluegrass fan in the world, but even a folky like myself has to admit it when I hear something too good to be passed up. Steve Thomas & The Time Machine bring a wealth of experience to the recording studio with them here, and even though this is the first LP they’ve recorded together as a group, they don’t sound like a band in search of their sound in All Of These Years at all – the exact opposite, truth be told. They’ve got something really special that they’re working out in songs like “My Heart Is Always Headed Back To You” and “Daddy’s Twin I-beam,” and if they’re given just a little more time to see it through, I think they’re going to end up developing one of the more attractive musical premises of anyone in their scene at the moment.