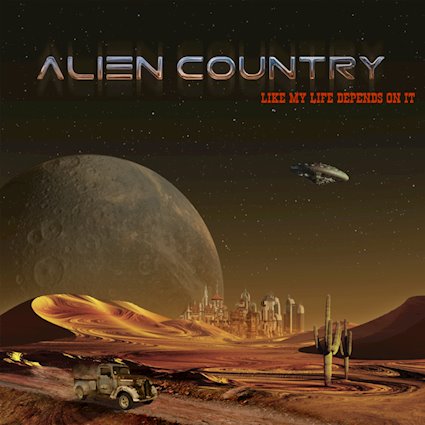 Alien Country has just released their new album “Like My Life Depends On It,” a modern Country Rock/Americana album with a Sci-Fi edge, unlike anything you have ever heard before.

Liam Marcus Torres is the founder of Alien Country, a Florida band making lively Modern Country Rock music with a sci-fi twist. The twelve song debut album, Like My Life Depends On It, is due for release in late Spring 2018.
Liam began his love of music with the piano when he was eight years old, and enjoyed the great composers of the Baroque through Contemporary periods. At the age of thirteen he began his obsession with the electric guitar and practiced passionately for five or more hours every day of the week.He was a determined pup and set out to reach the standards set by Eddie Van Halen, Yngwie Malmsteen, Vivian Campbell, Randy Rhoads, George Lynch, Chet Atkins, Merle Travis and other rock, blues, and jazz guitar greats.

While earning his Bachelor’s degree in Music Composition from a Florida university, he performed in multiple projects including his own original compositions, Billboard Top 40 songs, Alternative, Jazz, Montuno, Hard Rock and Metal. Over the years he studied under well-known artists like Bobbi Evors, Tom Hess, and more. He started his own music education business and has taught tens of thousands of lessons to great people of all ages and walks of life. He is a part-time news reporter for various blogs and online magazines and interviews other successful musicians like Joe Satriani and Phil Collen of Def Leppard.

Liam prefers the Modern Country Rock genre because it is outstandingly fun to play on the guitar, but like Jazz, it offers a great deal of complexity. He is particularly fond of the standard country guitar twang and says it is challenging but super fun. What makes Alien Country’s music a bit different is how he used his influences. From Iron Maiden to Bruce Springsteen, from the Beatles to U2, Liam brings more musical intricacies to the songs than mainstream country. He even dares to use unorthodox instruments like the ukulele and theremin, all while staying true to the familiar heart and soul of country music. Alien Country began in 2013 and has performed around Liam’s hometown of Tampa and all across Florida.

The Alien Country name comes from multiple sources, especially from his love of all things science fiction. “When you combine country music with how much I like sci-fi, well, the name Alien Country just fits like your favorite pair of jeans,” he says. Another source is the name of each territory comprising the United States of America. For example, Florida is considered a country according to international law and the laws of nations. The “Alien” comes from the fact each state is alien to its original or pre-1868 state thus alien to itself and, as many jurists, historians, legal experts, judges and Congressional representatives have indicated, to the founding fathers’ view on the guaranteed “Republican Form of Government”.

Liam Marcus is a home-schooling father of six who hopes to write music for a living for the rest of his life. He believes fun is at the heart of country music and brings that out in each of Alien Country’s songs. “I want my fans to have fun. Even if they’re having a bad day, I hope to put a smile on their faces and get ’em tappin’ their toes,” he says. He hopes to create a culture centered around his special brand of modern country rock and wants his fans to feel that his music is magical and can lift them up to new levels of pleasure. He says, “I want them to have no willpower when it comes to a song with a good two-step beat.”

Five years from now he wants to be able to talk and chat with fans about future music albums, have even stronger business relationships with other musicians, and expand networking opportunities between fans and the musicians they love.