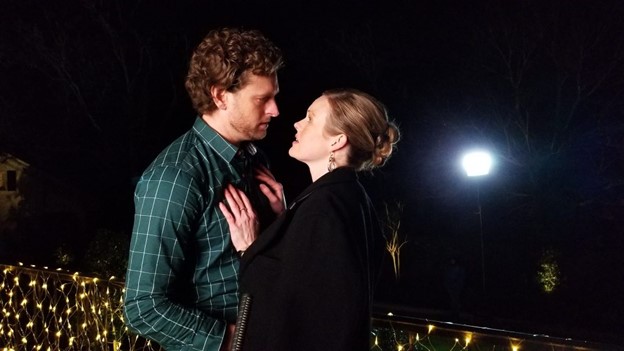 Los Angeles, April 2, 2021 – 2021 just may be the year for Actress and Producer Ashley Atwood after the rollercoaster of Hollywood. She has been submitted for a Daytime Emmy® Actress nomination for her lead role as Annika Marshall in the independent movie Rekindling Christmas.

Rekindling Christmas is a Hallmark-style movie, with a twist. The story follows Annika Marshall and Jesse Winchester – the perfect college couple. But a week after becoming engaged, Jesse is drafted into the NFL, he ghosts the relationship and never comes back. Years later, Jesse is back with a blown-out knee and only one goal in sight: to live a simple life and win Annika back. But Annika’s walls are high and her pain deep, it will take the help of Annika’s son TJ, every play in Jesse’s book, and just a pinch of Christmas Magic to gain her forgiveness and her heart.

This submission for a Daytime Emmy® Actress has come after years of work and some diverse roles for Ashley as an Actress and risks as a Producer. Another 2020 release of Ashley’s is Wild Wild Yogis where she also stars as Sage, a free spirited, bisexual woman struggling to find her inner strength. Wild Wild Yogis, a streaming short form comedy distributed by Brandon TV, is a love-hate letter to social media. A satire about millennials chasing insta-fame rather than facing their demons, Sage and her wife Rosa own the spiritual retreat called The Wild Rose where they created fame for the “Guru” in order to attain wealth for themselves using social media influencers instead of achieving actual spiritual enlightenment.

The role of Sage is in stark contrast to her role as Jesse Winston in the 2019 Lionsgate film called Hell on the Border. This historical drama is based on the true story of Bass Reeves (David Gyasi), the first African American Marshall west of the Mississippi River. Jessie Winston, a trail blazer in her own right, is the assistant to the new Judge Parker (Manu Intirayme). Her
influence and advice to the Judge breaks him out of his comfort zone and creates history.

We asked Ashley to speak to her about her submission as Daytime Emmy® Actress nomination, this new digital age, and what it is like to be a woman Producer and Actor in Hollywood.
How does it feel to be submitted for a Daytime Emmy®?
“I am incredibly excited and honored. Not only was this movie filmed in my hometown of Bryan, Texas, but I also had a very deep connection to the story. Christmas was my mother’s favorite holiday which she filled with traditions, memories, and light for her family.

When we lost her to a rare autoimmune disease, I too, lost my own light. The holidays turned bitter, especially knowing my son Cole would grow up without knowing his amazing grandmother. It wasn’t until my
current partner came into my life and embraced my scars that I felt encouraged to make new, happy memories in honor of my mother. That was the year I read the Rekindling Christmas script. I immediately connected with Annika’s story of loss and her journey of healing to find the
light in her heart again. Making this movie was my own journey of healing and I am forever grateful.”

How does it feel to be an actress in the digital age?
“The digital age has given us an opportunity to create material and content that we wouldn’t have had access to before. Everything from digital cameras, editing software, to digital streaming distribution has opened the doors for more creators to tell their stories. The digital age has turned filmmaking on its heels, and while it comes with the challenge of over-saturation, I am always excited to learn more…”

Where does your passion come from?
“As far as producing, I enjoy putting the puzzle together, finding the locations, cast, crew, catering etc. Acting has always come very naturally to me. It began by telling stories through dance and it’s always been the only place I feel truly myself. I love finding my character’s voice and point of view through my own life’s experience. When everything comes together, and the movie magic happens, I’m always filled with a sense of pride.”

What is it like being a woman in this industry?
“As most now feel – I’ve always just wanted to be treated as an equal. The more I work in the business, the more I actually feel the difference. I want to talk to and work with people that are smarter and more experienced than I am. I want to learn and grow in my life’s career. I love how
amazingly collaborative women in the industry are. There’s so much hunger, that the community is creating their own projects and telling our own stories in a supportive atmosphere. I now can
say that I love being a woman in this industry.”

What is your goal as an Actress?
“I would love to be on a TV drama series! Historical, Political, or Legal dramas are my favorite. Perry Mason, Bridgerton, Yellowstone, The West Wing, or Mrs. America are right up my alley as strong fierce parts. During covid, I was happy to be able to continue acting in any capacity – yet,
when I was presented a timely, heartfelt role like Annika Marshall in Rekindling Christmas it allowed me to be able to tell my own story through a motion picture, which felt so healing.”

Connect below to keep up with Ashley’s adventures in acting and producing:
Website: www.AshleyAtwood.biz
FB: facebook.com/AshleyAtwoodBiz

About Ashley Atwood:
Ashley is an actress/producer originally from Bryan, Texas. Trained in New York City and in Los Angeles at Playhouse West. She’s been seen in Lionsgate films like The Poison Rose with John Travolta, and Hell on the Border with Ron Perlman. She recently starred in and produced the
holiday film Rekindling Christmas, and the BTV streaming show Wild Wild Yogis with her company Thursday Afternoon Films. She is the proud mother of her brilliant son, Cole who is considered the Thursday Afternoon Films Mascot. He starred in one of their award-winning short films “Cole’s Crew” and is easily found on set with her at any given time.