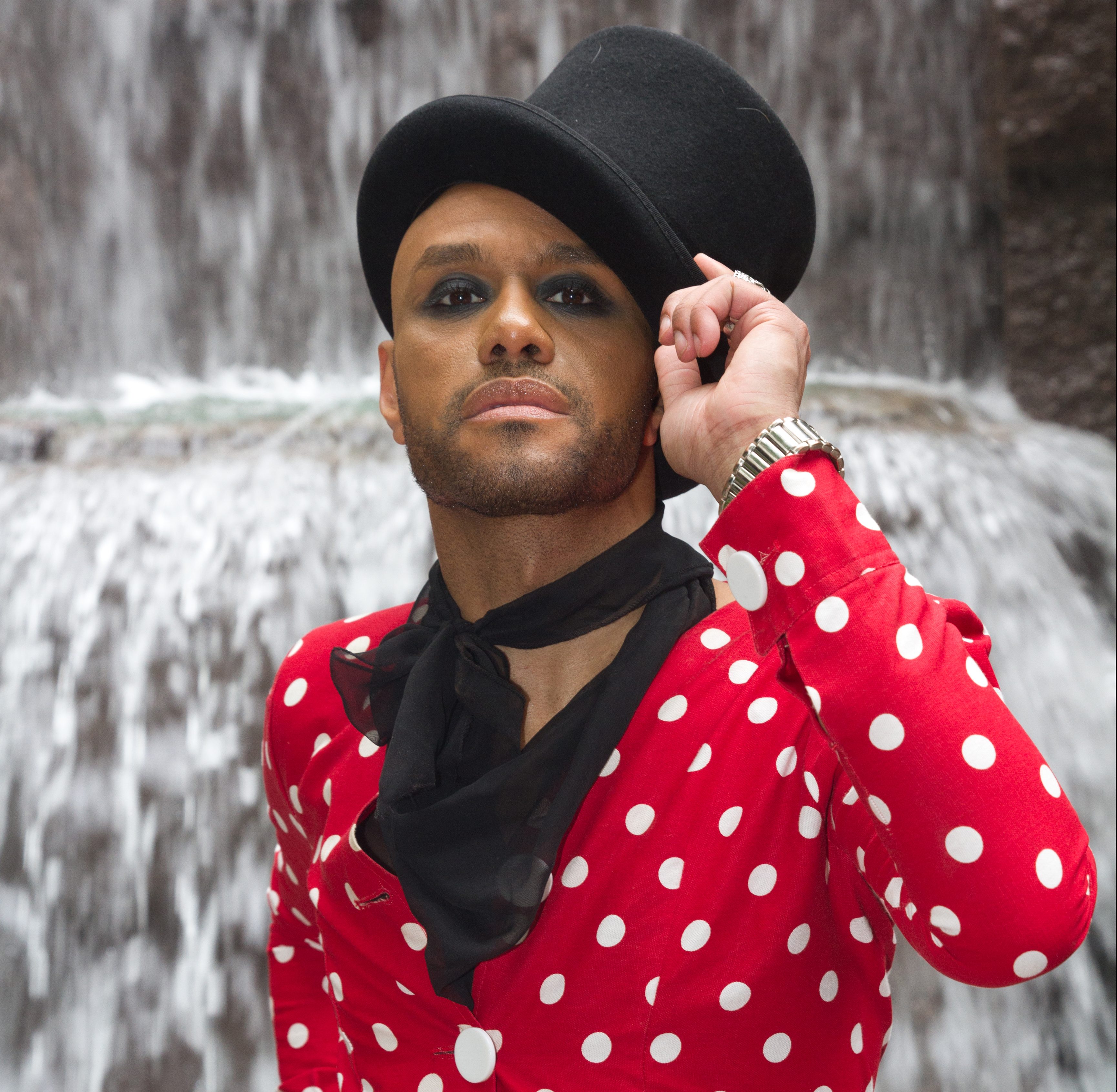 International pop star Aaron Paul, formally the lead singer of the popular British, boyband “World’s Apart”, created by Simon Cowell, has recently incorporated his musical talents with the world of fashion. As one of the most flamboyantly vibrant and confidently dressed singers on the planet, the transition is not far-fetched.

Having just come off of unveiling his brand new single with none other than Doctor Dre the iconic rapper and legendary host of Yo! MTV Raps, as well as singing inside a window, something completely out of the box, for NYC’s Fashion Week, Aaron’s schedule is something to be reckoned with. However, I was able to have him take a break to share some questions and answers…

As a global recording artist you have invaded the high powered world of fashion I the best possible way, how did you get involved?

Actually this whole fashion thing with me really was just by chance .. with a little calculated plan ..lol. But seriously, I didn’t expect the Fashion Industry to embrace me like it has. My publicist at the time sent me out a few years back to my 1st NYFW as a celeb etc … So I was just to walk the red carpet had maybe by sheer chance I’ll be photographed and mentioned in some publication. My profile was not so high at that time only in LGBT & Dance Music communities. So I said to myself .. How can I get myself noticed and cause a splash on the red carpet and make everyone say .. “Who is that dude”. So EASY…. lol, just wear some crazy stupid sparkly flamboyant and outrageous outfit that will outshine every other celebrity there and make every camera point at me. So I think I borrowed my Mom’s over the top jewelry, some ripped up jeans, knee high cowboy boots and a big hat. I then stepped onto the red carpet looking like Elvis meets country and western Fashionista ..lol. They went crazy .. everyone. The next day my publicist said .. “Aaron whatever you did or wore on that red carpet last night keep doing it.” I ended up in a ton of mainstream media publications for attending that event and from that I got invited to a ton of red carpets so they can see me do my thing. . But I really think fashion is all about an attitude. If you own it, they will believe it. Just try not to get in all wrong in the process. 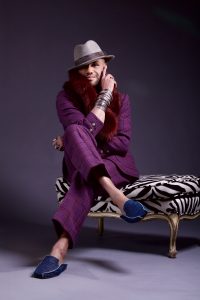 Please explain “The Artist in the Window”. What is the theme or message or purpose behind it?

Oh you’re talking about the recent live visual art project with NYC Brazilian designer, photographer and visual artist Antonio Oliveira Filho. His current art project called “we R “Artwork in progress” is an event I recently participated in. Antonio invited me back this year to feature me again. I did in it last year in his “BEYOND FASHION” project. So basically Antonio creates live art projects in a big storefront window right in the middle of Manhattan’s garment district that literally stops traffic. . Each year he chooses a bunch of real NYC artists and features them inside his art. And we perform and express our art surrounded by Antiono’s creative vision to an audience of passers by.. who will stop and watch the art display. It’s so much fun.. and it’s amazing the attention you get from on lookers. And you really get to feel and connect with them through the glass window. It’s a very powerful position to be just on display like this. With hundreds of on-lookers. And you see their brains trying to make sense of what’s going on. And they take selfies etc and post the art on their social media. Then the art just spreads. It’s very ingenius and clever what Antonio is doing each year and there is also a real message or issue he is addressing in his art. . And it’s always a pleasure and a treat working with him. He is one of a kind. A true artist and fashion icon in the city of New York. He knows and has worked with every major fashion person around. I am very lucky to work with him again for the 2nd time. The piece we did this year was just stunning!

How do you believe music and fashion become harmonious?

ABSOLUTELY! Both also hold their own weight as separate mediums. But together they are beautiful and totally harmonious. Together they help stimulate our brain senses with the visual aspect with our eyes and then the emotion of the sound that caresses our ears. which then sets the tone of personal attitude and that adds another layer of personal expression which then goes on to gain influence and than finally impact. Every project I do involves the two entities together. I am a very expressive artist. And my brain is always working overtime thinking of new projects, songs, music and how I’m going to help convey the vision or concept and help carry my message to my audience, and widen my audience. And I use fashion as a conveyance to help push my music. And I think most artists do. Look at David Bowie, Madonna, Lenny Kravitz and many many more.. old and new Sinatra, Grace Jones, Adam Ant, Lady Gaga, Bruno Mars, these artists really tapped into fashion and that became another extension of their artistry which made their own unique style stamp. They were very original doing just that. Which I personally see is very much lacking in the current climate of artists. Very few are making bold choices or even subtle statements. I can guarantee you.. You will always see all that with me and my work. And I will flip and change it up on you in heartbeat. That’s is what is exciting about music and fashion. It never ends. And as we already know with both music and fashion. It always comes back. 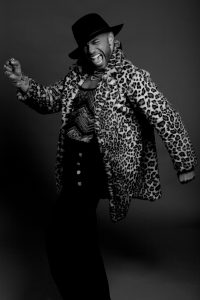 Tell me how else you’re involved in the world of fashion?

I just did Antonio Oliveira Filho new visual art fashion campaign “we R “Artwork in progress”. And we will run with that all year and hopefully he invites me back. I am the celebrity model for Morra Designs Jewelry in NYC. I love working with them because the jewelry they design for me is just as loud, big,sflamboyant and really just complement my own sense of style. I just got done hosting and attending a bunch of the fall NYFW shows. So I will gear up for the next NYFW in the spring of 2019. I still continue my Us Weekly magazine fashion cop duties. I have been asked to do a bunch of new fashion features for various fashion magazines to go along with promoting my new album DANCE this fall. A song of mine from that album just got chosen as the official song for a another visual art project called GREAT AMERICA by NYC visual art photographer Nathaniel Johnson. So I’m going to be combining a ton of fashion and fashion folk in the actual music video for that. I’m about to shoot another music video with my friend and award nominated photographer Billy Hess for my pop funk song I just did with hip hop Legend Doctor Dre (Yo MTV Raps) called Lessons In Life Love Music & Boy Bands. A tribute to my book that came out a few months back with author Nathan James. And I just found a young talented urban designer from South Carolina who draws and paints on his creations very cool stuff as a nod to the hip hop urban culture but with a very now hipster urban feel. He will be the stylist for the Doctor Dre music video. I am trying to persuade Doctor Dre to wear his looks too for the video. But how do you tell a music legend like Dre what to wear lol. But yep, I will just keep rolling to where ever fashion wants to take me. 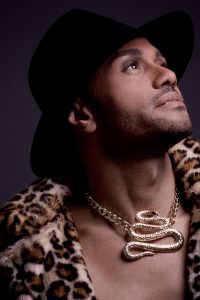 And the world of music?

The new album will finally be released soon. 1st it was supposed to come out spring of this year, then summer and now we are at the fall. Sorry for the delay fans. It’s just new and bigger things keep happening .. like the song with Doctor Dre. Which really just came out of nowhere when I was right at the end of recording the album. I heard the track and started writing the melody and lyrics which is all based on my life from my book IDON’T CARE! (Lessons In Life Love Music & Boybands) and a little voice spoke in my head Doctor Dre. So I literally went with my tail between my legs and asked Dre if he would be a part of it. I was scared shitless! Without a single hesitation.. Dre said YES… I was like REALLY ? He shouted out to his team “Whatever Aaron Paul needs, do it.” I was literally speechless on the spot. That this urban hip hop TV pioneer host and radio icon said YES to do this song with me. I’ll never forget that moment.

Please talk about your latest music and fashion endeavors.

I have another iconic NYC legend performing on this album DANCE. I recorded a re-make of Diana Ross hit MUSCLES with Michael Musto …. who is like God in our community and I believe in the world of Pop Culture. He was another one I couldn’t believe said he wanted to work with me on a project…. I was OMG .. Michael Musto wants to work with me. And we did it and it really has turned out brilliant. Peter Tanico of Exit 39 Production produced that one, as well as the bulk of the album. As well as reggae legend Paul ‘Virgo’Bent who did the Dre track with me and UK pop rockster and my new buddy Simon Bradshaw of WeatheredMan. He and I have our hit duet HAND IN MY POCKET as a dance club mix on my album also remixed and produced by Peter Tanico. My third solo album is very upbeat and just drives and makes you wanna dance. With the state of the political times we are now in.. I just wanna make everyone come together and dance. But I think my favorite song on this album is Drag Queen. Why? Cause Thanks to Ru-Paul who doesn’t wanna be a Drag Queen these days ….lol. Recently I just got nominated for BEST US SOLO ACT by the very popular PureM Magazine. This is just CRAZY to me, but shit I’m bloody taking it…lol. I’ve waited a long time to see my name stated as BEST US SOLO ARTST. I am very blessed and thankful for everything that music and fashion has brought into my life. 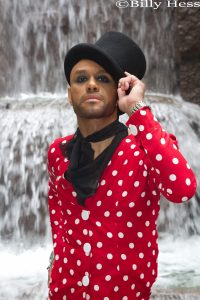