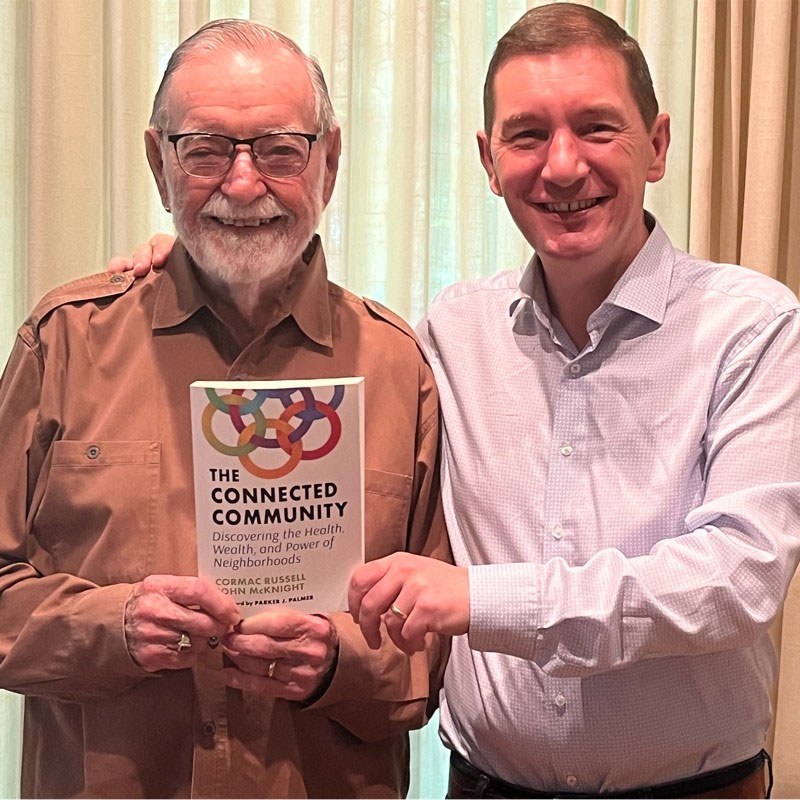 “A Plea for Connectivity” by Cormac Russell and John McKnight

Cormac Russell and John McKnight’s new book is essentially a plea for connectivity. It’s not often that a book that is so distinctly nonfiction, and running the risk of being dryly statistical, bears such a relevant and timely poignancy. But if the title is any indication, The Connected Community: Discovering the Health, Wealth, and Power of Neighborhoods genuinely moved me. It’s clear the writers believe not just in what they preach on a professional and evidential level, but on a personal one too.

The book has all the energy and enthusiasm of a passion project, while never at the expense of the facts. “Although we are advocating for grassroots change, we are not promoting an either-­or argument of people power versus institutional or political change. We need both. We worry, though, that if we’re waiting for our leaders to get their act together before we act, little will change in our life­ time. Change is not about one or the other party solving social and eco­nomic problems and other issues of disconnection; it is about making change happen from the inside out, because for most neighborhoods around the world the cavalry are not coming to save the day, and if they are coming, it’s to build a strip mall or shopping center,” Russell and McKnight write. “…We see the neighborhood as the primary unit of change and as a critical starting point for any serious effort to improve the odds for people who have been dissatisfied with current models of development.

For most peo­ple we know, ourselves included, making public change happen at world scale is not within reach. Although we know a few people who are do­ ing a wonderful job of making change happen publicly at city or county scale—for example, many major cities around the world are doing excel­ lent community-­centered work—for most regular folks, the canvas of a city or county is too big and too remote to create a better life on. That doesn’t mean that local efforts can’t spread from one neighborhood to others; it simply means that when it comes to widespread participation, it’s a good idea to change the world one neighborhood at a time, by finding out what people care about enough to act on close to their own doorsteps.”

They continue, “Stand at your window or on the street corner of your block. Survey your neighborhood. What can you see? The fronts of buildings, cars, people, domestic animals, some businesses perhaps? Now, consider what you can’t see: The skills, knowledge, passions, and experiences of neighbors whose names you don’t recall or barely know…You are now imagining the parts of your neighborhood that are cur­rently invisible to you and to most of your neighbors. Although these trea­sures may be hidden, they are abundantly available because they are close at hand, there for the asking. What you are imagining is the Connected Community, and the health, wealth, and power of your neighborhood.”