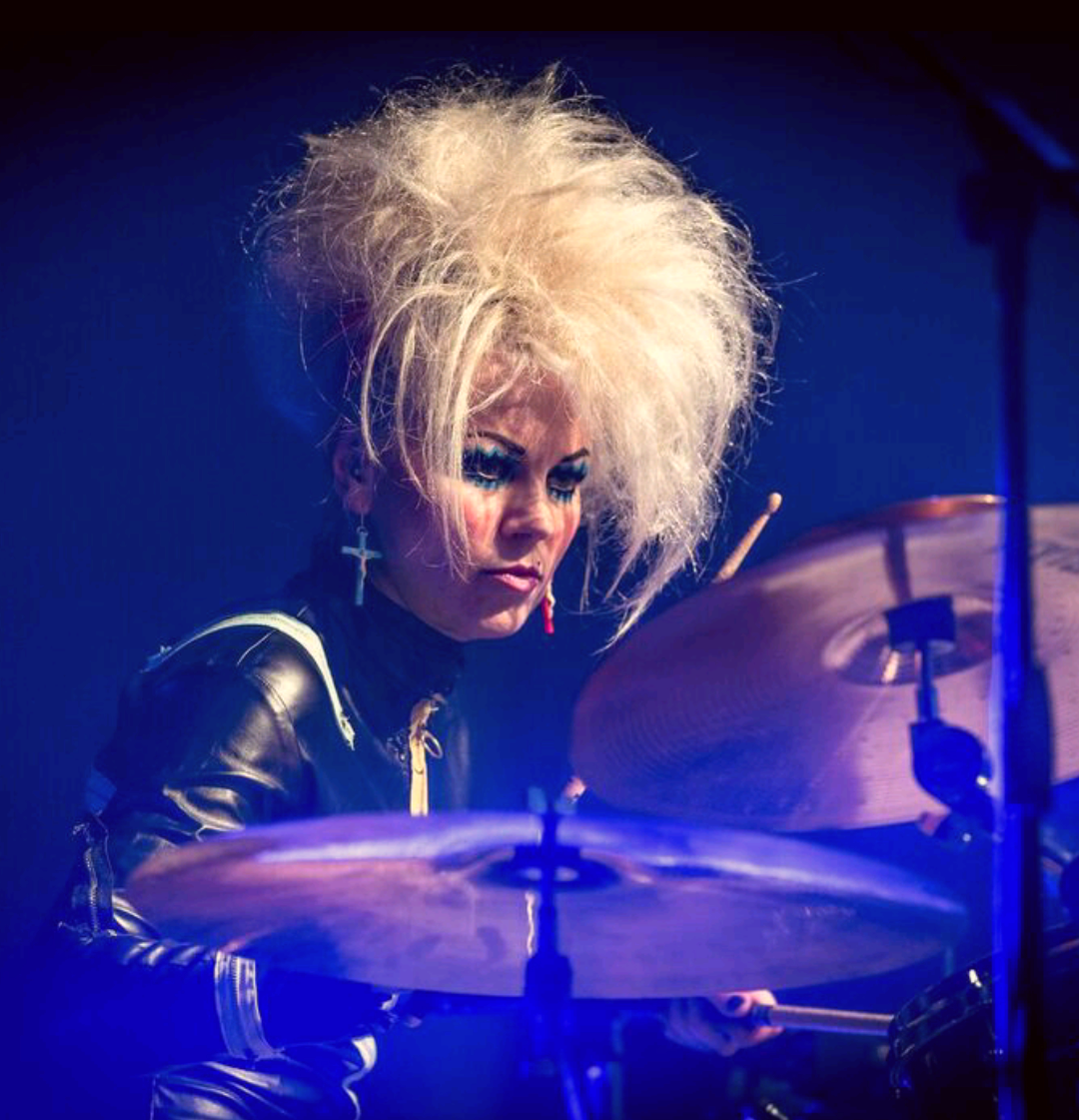 A Conversation with “Master Drummer” Jola

One of the most vibrant musicians on the scene today as well as the most fashionable, Jola is one of the twin drumming members of the supporting band of the iconic and legendary Adam Ant.

Adam Ant is and has always been (since the 80’s), one of the most exhilarating, flamboyant, and colossal rock superstars that the planet has ever known. As a frontman, Ant shines above the noise, however he is fortunate to have one of the tightest, most talented and titanic support bands in the music industry, Jola sensationally included.

Her essential and non-negotiable timing seems like one walking on a high wire without a safety net. Like a conductor, Jola and fellow drummer Andy set the pace for the music, and keeps the time with our emotions.

I suppose the biggest question that everyone is asking is how are you as a musician keeping safe and busy in today’s surreal climate, and what good do you think will come out of this?

I always like to keep busy, whether as a musician or in general, so it’s business as usual in that regard but possibly the challenge for a lot of people, whatever their profession, is not thinking too far ahead and getting anxious about what lies ahead. Only time will tell whether any good will come out of this current situation. Flora and fauna are definitely having the mother of all parties at the moment though!

Aside from this you and the band are preparing for a US West Coast tour, besides leaving the house what are you most excited about?

Alas, the West Coast Friend or Foe tour has now been rescheduled for 2021. Adam’s US tours have always exceeded high expectations and it’s a massive disappointment for me, but beyond anyone’s control.

As a drummer how well do you manage with improvisation?

I wouldn’t class myself as a skilled improviser, however, having studied jazz in the past, I’m not uncomfortable in this territory and I do enjoy musical voyages into the unknown. When I’m performing, I always try a different fill or voicings or change a pattern. Sometimes it works and other times it doesn’t, but that’s how I like to play. In a band situation, it’s quite exciting to perform a show that suddenly takes an unexpected turn and requires an ensemble ad-lib!

I have a Gretsch New Classic in Black Sparkle with 10″,12″ rack and 14″,18″ floor toms. My snare is a vintage 1970s chrome Gretsch. Sabian and Paiste cymbals. I use Evans Calftone skins on all drums other than the 18″ floor tom which has an Evans Hydraulic. These skins have been a revelation. The sound they produce is so big with minimum tweaking needed.

What is your biggest challenge and triumph as a drummer?

Good question. Just when I think I’ve overcome my biggest musical challenge, another one comes along and that’s fine by me! Playing in Hyde Park to a massive crowd with Adam, Stevie Nicks and Rod Stewart was a crazy day. I am just thankful for all the luck I’ve had.

What would your ultimate gig be?

If you mean as a performer, then Glastonbury and Coachella would be interesting, as I’ve never played either of those festivals. If you mean as a spectator, I’m not sure. Though I did go to a surprisingly brilliant ELO gig. I wasn’t really a fan and wasn’t expecting much, although I am appreciative of their quirky, orchestral songs. But that was a hell of a show. No messing with the original arrangements, an excellent sound, which really does make a difference, and a celestial light show. A two hour fantasy. Certainly checked out their back catalogue after that. Thanks Roy!

What music do you personally like to listen to?

I listen to all kinds of music. Though it’s been a long while since I heard anything by a new band/artist that excites me. I’ve got Hank Mobley on a loop at the moment! He had a mind boggling gift for composition and a vast output of material, much of which I haven’t yet heard but currently on my Mobley loop are the albums Dippin’, No Room for Squares, Soul Station and Hi Voltage. These albums also feature legendary drummers Philly Joe Jones, Billy Higgins and Art Blakey. There’s some fascinating rhythms going on here.

Do you have any solo projects that you are working on?

I recorded some reggae tracks as part of a new project last year which went on the backburner due to other commitments within that band. But we may now have an opportunity to fine tune those tracks and get them heard. I’ve also been writing songs that would be good to record with a live band at some point. There’s 7 months till the end of this year so anything could happen between now and then.

Who does your fashion?

I design my own stagewear. I sketch my ideas and forward them, together with fabrics, zips, buttons, to the very talented Naomi Gibbs, a theatre costume designer who I’ve collaborated with many times. My costumes for the Friend or Foe tour were made by Naomi (www.societybelle.co.uk), and were based on my original sketches. She made them beautifully. They got pummelled on two tours but are now packed away, having a rest and waiting for the West Coast 2021! There are also lots of other stage outfits that I wear with Adam that I’ve cobbled together! I enjoy creating an alter ego for the stage. I’ve worn jeans and t shirt onstage with other bands but use colour and trinkets for effect like many performers.

Adam’s image is very dramatic so I hoped that a theatrical look would work for me in his band.

Are there any tips that you can share with other drummers to improve their speed?

Playing fast does require stamina and ease of movement but playing at slow tempos is more difficult in my view. The musician is exposed. Dealing with space can be tricky. Precision and timekeeping are under more scrutiny. But for drummers wanting to gain speed in their technique, the bad news is there’s no fast track to thrashing around the drum kit at breakneck speed. Unless you’re lucky enough to be performing continuously, boring old practice and repetition are the most effective way to improve your speed. If there’s a fill you want to perfect, slow it right down. Practice with heavier sticks than usual. Play it from memory as much as you can. Only refer to the source material, audio or written, when you have to. Move it up a gear once you are comfortable playing it slowly. There are tons of good drum tutorial books for rudiments out there for the reading drummer, but my favourites are Buddy Rich’s Modern Interpretation of Snare Drum Rudiments and George Lawrence Stone’s Stick Control and his more advanced book, Accents and Rebounds. Lots of essential reading to be found there.

2019 was the business. I was very busy musically. Aside from my work with Adam, I branched off into a reggae collaboration and recordings which as stated, I hope to pursue this year. Last year, I also did a stint with London band The Priscillas for some summer shows. The Priscillas (www.thepriscillas.co.uk); Taylor, Val and singer Jenny, have some great songs, punchy and melodic. Jenny is a very dynamic performer and I had a lot of fun with this lot! The east coast US and UK Friend or Foe tours with Adam were just sensational. Some very memorable shows! Cincinatti, Detroit and in the UK, Hull and Blackburn spring to mind. Adam’s energy and athleticism were second to none and he has such a great connection with the audience and we were firing on all cylinders, so I am disappointed that the US west coast tour has been rescheduled for 2021, but we will be back and after a lay off like this, I’ll be straining at the leash to get back on stage and thrash my drum kit to within an inch of its life!