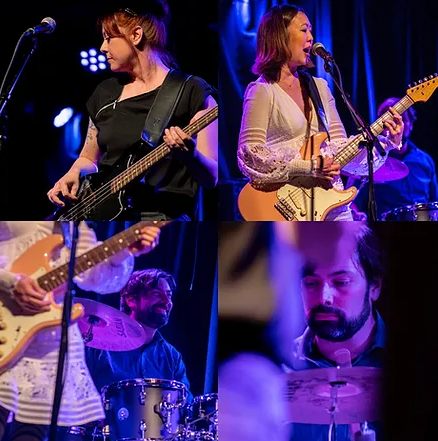 Thrusting out of the silence ready to rip just about anything that gets in its path to shreds, “Black Cat” isn’t playing around with us as the track unleashes one oozing layer of riff-centric decadence on us after another. This song might not be as sharply arranged as “Believe” is, but let’s face it – in order for Velodrone to introduce us to who they are and what they can do properly, they have to give us as multidimensional a tracklist in this debut eponymous album as is possible without producing a total and complete mixtape.

In true throwback fashion, this band cuts a record here that stylistically pairs itself with a 90s narrative both aesthetically and technologically, all the while still allowing for the simplistic punk of “Voyeur” and the bloodthirsty “Sleepwalking” to sound as unforced and honest as any of the material that once inspired their compositional standards. Call Velodrone a band from another time if you want, but judging from the ambitiousness of their first studio LP, I don’t think they’re all that interested in what the haters have to say – they’re clearly having plenty of fun with this identity and all of the sonic might that comes with it.

“Together” is probably the lone true pop song on the album, but it doesn’t grate on the consistency of the tracklist at all. Next to “Reality” and even “Harvest Moon,” “Together” poses more of a challenge to its players through a modulating groove that doesn’t let them take any shortcuts in their direct route to catharsis (what little of it there is here, mind you). For a song like “Love Race” to work properly, Velodrone pushes all of the instrumental kick to the surface and lets the lighter melodies filter through the dirtiness of the amps, not unlike a method I recall a pre-major label Screaming Trees and Mudhoney employing for themselves.

There are more rough corners in this record than not, but if you’re paying attention to the curb appeal, I don’t think you’re getting what the band was going for at all. This is about getting back to the basics of brawn, and for what I look for in a rock album of any generation or era, it’s exactly the kind of anti-passive collection of performances that works no matter the mood or time of year.

Whether it’s the onset whisper of “Elated” or the searing glow of “Wysiwyg,” Velodrone’s debut is a record that doesn’t plan on leaving you with a neutral reaction – this is an LP structured specifically with the intention of either getting you on your feet or swinging your arms in the air alongside the beat of the percussion, and though it isn’t without a couple of unnecessary attributes here and there, it’s still one of the most complete and mature releases I’ve heard from a greenhorn in the rock n’ roll game this fall. Velodrone are a group rockers need to keep on their radar, and after hearing their first album yourself, I think you’re going to agree.