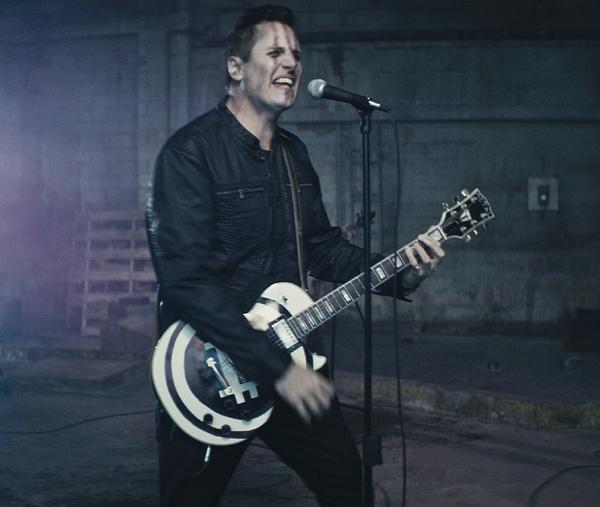 When it comes to a musical rebrand, bands generally see themselves evolving into new genres or sounds that they couldn’t have explored in previous iterations. In 22 Hertz’s case, this meant swinging away from the more traditional metal makeup of lead singer and bandleader Ralf Muller’s previous rock group Point Blank in favor of something a little more modern and industrial.

Having a background in metal certainly benefits 22 Hertz, but the flexibility to infuse their songs with far more dynamic than just heavy rock instrumentations is a major plus for mainstream fans discovering the band for the first time — their single “Get the Hell Out,” which first debuted in 2018 to massive fanfare on the band’s YouTube page, is a perfect encapsulation of what 22 Hertz is all about, and the perfect sophomore shift for the group after their debut record Detonate.

“Get the Hell Out” draws plenty of comparisons to Nine Inch Nails, and Muller will be the first to make them. Using NIN’s lead singer and mastermind Trent Reznor as a major influence alongside Steve Vai, there’s a certain charm to 22 Hertz making their way in music while paying homage to such a titanic industrial rock act. There can never be too much Nine Inch Nails in the world, especially lately as Reznor has shifted focus to film scores and compositions, and 22 Hertz seems more than ready to take over the mantle in the band’s time away from the limelight. Speaking of time away from the limelight, 22 Hertz is pretty infamous for doing the same — with Detonate releasing in 2013 and “Get the Hell Out” coming five years later, the gaps are significant, but the material more than makes up for it.

22 Hertz is a band unconcerned with catering to audiences, and with Muller’s experience in the industry, that seems to line up with things fairly well. When you’ve been in a metal band and have taken time away to work on a separate career before returning to tackle a new sound, you’re pretty much allowed to do whatever you want, with no limitations based on fan response. At the same time, “Get the Hell Out” is a massive, crowd-pleasing track with tons to love about it, and the single’s YouTube comments section is one of the several online outlets you’ll see universal acclaim. The fact that 22 Hertz can perform how they want and when they want is freedom very few bands get, but the joy of being an independent act in modern music certainly has its benefits.

“Get the Hell Out” is a perfect calling card track that clues fans new and old into what 22 Hertz has been up to, and the accessibility of the track is certain to bring in a wide variety of fans discovering the group for the first time. It’s industrial rock at its core, but 22 Hertz and “Get the Hell Out” are concerned with crafting catchy, hooks-driven rock music above everything else — and they’ve succeeded!