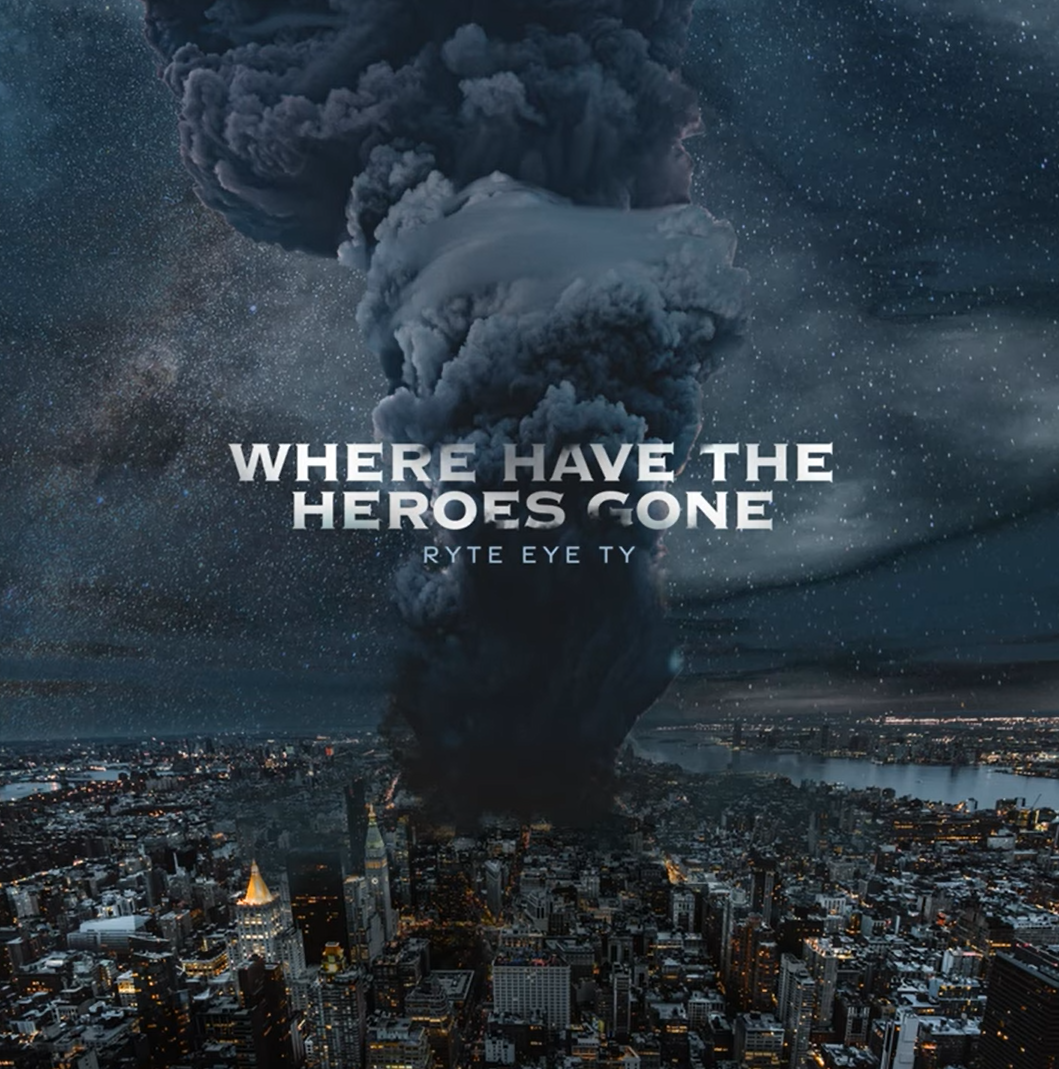 “Where Have the Heroes Gone” by Ryte EyE Ty

Piano keys rain down from the heavens above. Ryte EyE Ty’s voice penetrates the deluge of chaos with a sharply-defined melody undamaged by the adjacent discord. His words accumulate and form a cloud over the instrumentation in the foreground, and before we know it, they are as strong as any aural element in the track. This is Ty’s new single, the patient “Where Have the Heroes Gone,” and though its introduction is quite short and sweet, what it sets the stage for is the very antithesis of simplistic.

We’re in the palm of the singer’s hands before we’re out of the first stanza, and with a molten-hot melodicism to guide the way, we’ll spend the next few minutes wandering through a dark forest of sound by his side, searching for some kind of sonic catharsis.

As much as I enjoyed the instrumental half of “Where Have the Heroes Gone,” there’s just no getting around the magnetizing energy that Ty’s vocal adds to this mix. Whether he’s sinking into the opening verse or belting out the chorus as though his life depends on it, there’s never a second in his performance where we aren’t automatically attracted to his crooning at the center of the storm, no matter how powerful the piano in the backdrop might be. He’s got a natural charisma that you just can’t water down in this track, and though it recalls a handful of adult contemporary singer/songwriters to come before him a generation ago, it’s not a sound that I would relegate to the throwback category.

I was pretty happy with what I heard in this single from top to bottom in my initial sit-down with “Where Have the Heroes Gone” this past week, but after analyzing it a few more times, I think that Ty has some space to grow into his voice more than he already has. He’s got such a homespun personality in this song that, if we were to strip away the instrumental facets altogether, I believe he might sound a little too folksy for the kind of material that he’s writing. This is a much more demanding look than many artists in his position would be trying to pull off in the present stage of the game, but while he might be biting off a bit more than he can chew, it’s a good indication as to what he could accomplish in due time.

“Where Have the Heroes Gone” concludes with a bit more grandeur than it begins with, but as it fades into the darkness from which it was first sprung nearly four minutes earlier, there’s a haunting sense of unresolved conflict that lingers long after the music ceased to play entirely. This is the beginning of a long journey for Ryte EyE Ty, and if he can avoid the temptation to streamline his sound while indulging some of the more eclectic elements in his artistry, he’s going to see a lucrative return on the emotional and financial investment he’s made in the intriguing material he is currently recording. Time will tell us more about his long-range viability, but as of October 2022, this is a player that you need to be keeping tabs on.

The music of Ryte EyE Ty has been heard all over the world in partnership with the radio plugging services offered by Musik and Film Radio Promotions Division.  Learn more https://musikandfilm.com